Random Photo of the day

I took this photo this afternoon somewhere in Tokyo. No prizes, but can anyone guess where this is? 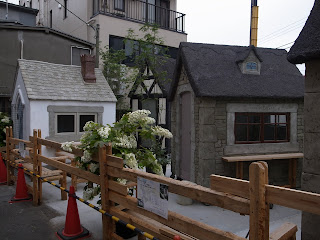 Yes, they have wheels on them, and no I have no idea what they are going to do with them. They appeared within the last month.

One of the joys of life in Tokyo, the random things you see around here every day.
Posted by Jon Allen at 8:29 PM 3 comments:

Saturday 11 June 2011 marked the 3 month anniversary of the earthquake and tsunami that struck the Tohoku region. I took the opportunity to go to Ishinomaki, in Miyagi Prefecture to do some volunteer work.

The organiser had hired a 26 seater coach and we departed Tokyo just after 8pm. The two coach drivers took it in turns to drive us through the night, arriving at 3am at the Ishinomaki Senku University. They turned on all the coach lights to tell us they’d arrived and to go back to sleep until 7am! Mercifully there were no loud snorers but I still only managed about an hour of sleep. At 7am we drove several miles to find a Shikyu restaurant, where we all ate a hearty breakfast before returning to the Volunteer Centre at the Senku University Campus, to get our assigned task for the day.


The organisers’ desk opens at 8am every day and they efficiently processed us and the many hundreds of volunteers that were staying in tents or had arrived in cars and coaches. For those of us who had not been before, we were given small green insurance certificates and everyone was given a sticky label to attach to their clothing with your name, and to indicate that you were a volunteer. So we got into our working gear. Wellington (rubber) boots are by far the best footware, with gloves, helmets, dust masks and protective eye goggles and drove set out to start work on a small hospital building. The first stage of cleanup had already been done, that was to bag up most of the small items of rubbish, and one room was piled high with rubbish bags. We formed a human chain and made short work of shifting them outside where the council will take responsibility for removing them. The next stage was to remove all the large items : beds, chairs, tables and other furniture. We then broke for lunch, which was at the same place as breakfast, earlier, and where there are two other restaurants open for business. This is how it looked after the tsunami. In the afternoon we returned for the final task, which was to shovel the sludge into bags. The thick, oily, mud had covered everything to a depth of approx. 2cm. It was fairly dry and didn’t smell too strong, though I was very careful to always wear gloves. The end result, You see the tide mark a few inches from the ceiling ? That was how high the waters reached.

The mud filled sacks were taken outside into a separate pile and again the council will eventually come to collect it. Of course, one enormous problem for the disaster recovery is what to do with the massive amount of debris. Over 24 million tons alone in just three prefectures.

At exactly 2:46pm we had a moment of silence in remembrance of those who lost their lives, including the 24 people who had died in that same hospital.

After washing all the tools and the boots, we boarded the coach again and went to the port area of Ishinomaki, which had been hardest hit by the tsunami. There was almost total devastation, only a small number of structures remained. The damage was astounding. More photos from Boston.com and some more of my photos on flickr

Another hour’s drive away was our hotel, and we arrived just in time for dinner, and with a little time to spare for the onsen. Those of us who were not completely exhausted, then stayed up for karaoke. The trip home on Sunday was uneventful, and we were back in Tokyo around 4:30pm. Dividing the cost of the coach between 26, it came to 10,000 yen each. The trip organiser had arranged for a volunteers’ certificate from the local ward office, and that entitled us to avoid payment of the expressway tolls, which would otherwise have added 30,000 to the total bill.

Only 15% of the ¥251.4 billion collected by the Red Cross has been distributed by local city and town civil servants who are, not surprisingly, struggling with the disaster themselves.

It's clear from my trip that one thing the locals do need is more man power. Cleaning out buildings is hard manual labour that really cannot be mechanised or automated. If you want to go up to the Tohoku region the organisation of volunteers, at least in Ishinomaki, is very good. If you don't speak Japanese Peaceboat are organising regular trips from Tokyo.

The trip from Tokyo by car or coach is long and expensive, what I'd like to see would be companies like H.I.S Travel offering cheap volunteer trips up there by shinkansen. I'm sure more people would be prepared to offer a day or two of labour if it was made easy and simple. What's your excuse for not helping?

This is my entry into this weeks: