Just a few tips and observations on renewing your Japanese driving license.

First, if you have not set yourself a reminder for three years after you got your first license, then look out for the small and innocuous little note you get in the post get about six weeks before it is due to expire. The only way I had to identify that it might be something important was the web site address http://www.keishicho.metro.tokyo.jp. They also give a telephone number for an English Guide 03 5463 6000.

The telephone guide very clearly explains that you only need to bring three things with you : The reminder notice, your current driving license and your residence card. However when I arrived it was clear that is no longer true. You now need to provide a Jyuminhyou ( certificate of residence) as well. This has changed since the last time I renewed three years ago due, I assume, to the abolition of the Alien Residents Card.

So I had to go back to the Driving License centre at Samezu the next day after a trip to the Setagaya Ward office. [They were very efficient and I was issued with the required piece of paper in less than five minutes.]  The other item you should also bring is a recent, very small, photograph of yourself. Otherwise you have to pay 700 Yen at the machine there to get one. And this is the crazy thing: they then take their own photograph of you to put on the driving license! Quite why they need you to provide a photo for them to stick on the paper form they process I really cannot fathom.

The renewal process consists of visiting various different numbered stations: Payment is at one desk, then there's one for the very brief vision test, another station for creating a PIN code, back to the main counter, and then you get sent upstairs for the lecture. This was a sly photo I took of the inside of the license issuing office (there are a couple of small signs indicating no photographs, so don't tell anyone.. ) The last time I went it was the old building next door which was a very tired and old looking place, but it seems like they have very recently moved into this brand new building : 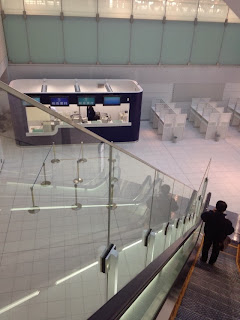 The lectures are given every thirty minutes, in Japanese only, during the morning and last just over an hour. I have very little idea what they cover, but mercifully there is no test at the end, so you just need to stay awake. There is a short video about avoiding accidents; I think they covered what to do if driving during an earthquake, and they explained the four different stickers you might see on the back of a car. I did a quick google search when I got back home to find out what they all mean and the second link in the search results is a great post from the prolific Japan blogger Tofugu about them.

Finally you get to pick up your new license, and there is the very last station where you get to configure it with your PIN code, [Does anyone have any idea when or what you might actually use the PIN code for? ] and you are free to go: 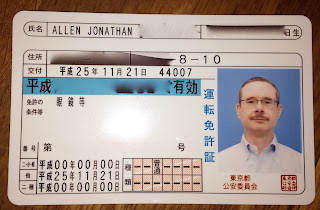 Renewal time came just in the middle of Movember, so my moustache will stay with me on this card for the next three years!   For those that remember I did Movember two years ago.  Once again I am raising money for Men's Health issues: research into prostrate and testicular cancer, and mental health for men.  So please go to http://MoBro.co/JonAllen and donate to me, or to my team the Miso Strainers, thanks.

Yakushima is an island off the south coast of Kyushu, famous for it's ancient Cedar trees known as Sugi. My wife and I enjoyed a week on the island at the end of March. The easiest and fastest way to get to the Island is by flying and there are five flights a day from Kagoshima airport every day. Cheaper options are to take a Jetfoil from Kagoshima, or a slower ferry, but, as we looked down at the choppy seas from the airplane on the way in, and our previous experiences with sea sickness on boats, we were very glad to have paid the extra to arrive at Yakushima's small airport on the west coast of the island.

It was a short taxi ride to our accommodation at the Yaedake Lodge just outside the port town of Miyanoura. We arrived while they were serving the evening meal, but, as we'd not booked a meal for that evening they were not able to serve us. The staff were very apologetic and immediately volunteered to drive us back into the town to find a restaurent. The first place was full, but the second option could serve us. We declined their generous offer to come back and pick us up afterwards and instead we walked back after our meal. The last 10 minutes was down a winding road with no street lights, but we navigated is successfully with only one fright when a deer made a loud call.

We visited the Environmental Culture Village Center the next day, a stylish modern building beside the port in Miyanoura. It houses a small exhibition about the Island including: highlights about the weather, up to 8000mm of rain per year on some parts, ( yes 8 Meters of rainfall!) ; the wildlife : a number of endemic species including Yaku-Monkeys and Yaku-Deer; the ancient cedar trees, of course, and the people and their customs.

It has an IMAX size cinema screen that they use to show a 25 minute documentary 'Yakushima, Symphony of Forest and Water' (with English subtitles) about the island every hour. I must admit my memory of that is impaired by having slept through most of it.
The Center also has a good supply of tourist information in English including Bus timetables, Maps, leaflets and accommodation list. They stock a few books in English , 'Yakushima Diagram' is the most comprehensive, but surprisingly not the book we had already purchased 'Yashima A Yakumoney Guide'. Written by an English man living on the Island the book is the distilled information from his highly informative website YakuMonkey.com

Our original plan had been to stay at the Lodge for the whole week, but they were full on one day in the middle. We decided to seek accommodation for the second half rather than move out and then move back again. One of the ladies at the Centre very kindly called one of the minshikus on the list and book us in.

There are two main areas where you can see the ancient cedar trees, Shiratani Unsuikyo and Yakusugi Land. We enjoyed both forests and it's difficult to pick a favorite. If you are pushed for time and on a budget then the Shiratani Unsuikyo is quicker and easier to get to from Miyanoura, if you only have one or two days on the Island.

Before we flew to the island my wife and I discussed how we might hire a car,but after we arrived on the island we realised we'd forgotten to bring our driving licenses.. Ooops.. So our transport was limited to the local bus and the occassional taxi. The bus service is frequent enough that we did not feel we missed much. There are certainly a few extra sights we would have seen if we'd hired a car, and we might have spent longer at some places rather than have to worry about the next bus back. Shirtani Unsuikyo is certainly one of those places. There are four buses to the recreational forest per day, we took the second bus of the day and arrived at about 10:30am we had enough time to do the three hour 'Genseirin (Primeval Forest) course.

This route takes in seven of the magnificant named YakiSugi trees including the Yayoisugi Cedar , one of the top 100 Megaflora of Japan. The path was very well marked and easy to follow, it's classed as a 'mountain climbing path' and sometimes involved some steep and rocky tracks. We were there on a weekday and saw a few people. The quiet of the forest and the variety of trees and vegetation was fascinating. There is a one hour course which can be walked in almost any kind of footware.

We we also keen to see the Okono taki waterfall, considered one of the top 100 waterfalls in Japan. The bus only goes to the waterfall from Kurio twice per day and careful planning we arrived after the ninety minute bus ride around almost three quarters of the island. The 88 meter high falls were an impressive spectacle, the clear blue water of the basin was nice.

After admiring the waterfall and eating our sandwiches on the deserted sea shore just a short walk away, we came up with a plan. The only bus back from the waterfall was in three hours it goes back the way came anti clockwise on the island road, the Seibu Rindho forest road continues clockwise around the island. We would walk ninety minutes onward and hope to hitch hike a lift on to Nagata to get to the start of the bus route, or walk back to the bus stop if no one stopped.

It was a clear sunny day, the road was deserted and we walked peacefully along the road for almost an hour before the first car going our direction appeared. We held up our thumbs expectantly and were pleasantly surprised when the young man stopped and picked us up. He spoke enough English that we could have a reasonable conversation and exchanged details of our respective holidays on the island. The single lane road winds its way through the unspoilt scenery offering glimpses of the sea and the mountains. The monkeys and deer were also common sights along the way to Nagata. He dropped us off by the bus stop and we had time to enjoy the sandy beach which is very popular with turtles for laying eggs.

On one of the days we planned to do slightly more strenuous walk starting along one of mountain trails. We caught the bus to Yakusugi-land and stayed on to Jumon Sugi, the last stop. This tree was probably the most impressive of all the trees we saw.

We didn't feel we could leave the island without visiting the other forest Yakusgi-land to see the Sugi, so we once again caught the bus. You have to catch a second bus (changing at Gomae) for the trip up into the mountains. It was a cold damp morning and our choice was to catch the next bus back in one hour, or wait for the one after in five hours, so we decided on the former and followed the 50 minute tour route around the ancient cedar tree forest.

Our accommodation for second half was the Shiratani Minshuku in Kusugawa. It is well positioned: close to the bus stop, not far from Miyanora or the airport, It's a modern house but the land lady does not live there, and because we were the only guests, and we opted for no meals, we had the whole place to ourselves. I'm sure you are not normally allowed to do self catering when you go to a minshuku, but it worked out perfectly for us because my wife much prefers her own cooking to eating in restaurants. The supermarket in Miyonora provided the raw ingredients for all our meals.
Posted by Jon Allen at 6:59 PM No comments: