Things I will miss

This weekend we've been to a couple of places
that will be hard to find in South Korea.

Stand up Comedy.
We went to Jongleurs comedy club in Camden on Saturday evening and had a very entertaining night out. The five comedians all had very different styles and kept us amused. The listing has already gone from the
site and I cannot remember the names of any of the acts except Otis Cannallonli.

Here's a tip for saving 25% off on tickets: get yourself a First Contactcard, it's a free, no obligation, discount card. Enter contact25 in the discount code box on the ticket booking part of the website and you save three quid on each ticket.You don't need to show the card when you get there!

It's the second time we've been to Jongleurs, the club in Battersea is similar in layout with chairs arranged around tables. Neither is as good The Comedy Store
situated between Leicester Square and Picadilly Circus.

We also took our guest to The Tower of London to see the Crown Jewels. Being members of Historic Royal Palaces our tickets were free.

Sunday we visited Kew Gardens and went up the Pagoda sadly the weather was not great, so my photos are not worth posting.
Posted by Jon Allen at 6:56 AM No comments:

A little history first. Since we came back to
London after six years in Zurich and two years
in Amsterdam before that, we have always
thought of living in London again as a temporary
thing. We've both had jobs, but now it's time for a
change.

About six months ago we settled on
South Korea as our next destination.
The Bat found a position teaching English as a second Language
at a language school in Seoul and started the process
of applying for a work visa.

This took a little more work than expected.
You need to have a sealed transcript of your university
degree course. Once this was procured along,
with a copies of various other documents that all
needed to be authenticated (luckily the Chamber of Commerce
in London were happy to be of service) this was sent
to Korea by courier. Once they received it
they submitted it to the immigration.

Two weeks later we got back a visa number, The Bat took
this to the Korean Embassy
in London and we ended up with a visa each
The Bat has the work visa and I have the "dependant spouse" visa :
That's what the F3 refers to. 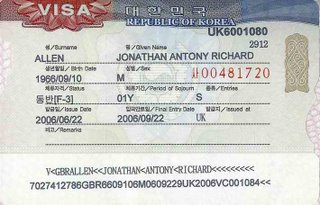 With Apologies to the Blues Brothers

I'm not yet living in Seoul, but I will be soon.
This will be the story of life in South Korea for
an expat British man.

I'll be telling you about what it's like
to live there and how my wife and I get on.
My wife will henceforth be known as The Bat.
Posted by Jon Allen at 4:35 PM 3 comments: