We've been slowly exploring Tokyo by subway and JR Line railways since we arrived. I noticed that each station seemed to play a different "chime" over the loud speaker after a train arrives. I had thought it would interesting to try and collect recordings of each tune but, not surprisingly, some one has got there before me.

These are the chimes for all the Yamanote line stations. The station names are all in Kanji, but if you translate them though google it gets about three quarters of them correctly, (but then the links to the chimes don't work so use the first link). The correct station names are here.

My favourite is Ebisu (Translated as "The god of wealth" on the list). What's your favourite?

Thanks to Gaijin Girl, who wrote an interesting blog on her life in Japan but has just left the country, for the link.
Posted by Jon Allen at 12:01 AM 3 comments:

I recently put together a list of the 30 top ranked Korean websites. At the time I thought it would be interesting to try and rank the Korean blogs but I couldn't figure out a quick way to do it, so well done to Gdog over at The Daily Kimchi for doing something similar for Korean Blogs.

He has produced a list of the top 46 Korean blogs ranked by their Blog Juice. Top of the list is of course The Marmot's Hole followed by Mike The Metropolitician. In third place, a blog I've not come across before, is Web 2.0 Asia. It's written by Chang-Won Kim who is the co-CEO of Korea's leading blog software company, TNC. It covers lots of new web related stuff coming out of Korea.

The list continues with lots of other well known Korean bloggers, Oh, including this one too! In fact there was only one blog that was new to me in that list Everyday seoul.

I was asked recently about going to teach English in Korea and I was able to point them at this excellent summary of 44 Tips for getting a job in Korea from Chris that I had just read.

If you need to get from Cheonan to Seoul Station on a rapid train Delta Eagle, has all the details.
Posted by Jon Allen at 9:28 PM 1 comment:

It was about this time last year, after a month in Korea, that I posted an item about Korean Tee shirts, with a photo of my all time favourite: The Convex Magnum Opes.

The Japanese also go in for Tee shirts with English slogans. Most of them are slightly more intelligible than some I saw in Korea, but not much.

This one would have been very amusing on a young lady: 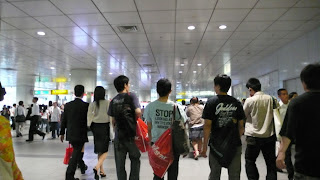 I didn't have the heart to ask the young man what he thought his Tee shirt might be about.

If he was wearing it in Peterborough, England he might have risked a fine, as this chap did for wearing a strongly worded Tee shirt.
Posted by Jon Allen at 8:36 PM 2 comments:

Email ThisBlogThis!Share to TwitterShare to FacebookShare to Pinterest
Labels: japan

Stephen Colbert laughs at the Japanese

Just so that the Koreans do not get the idea that Stephen Colbert only makes fun of them, here he is on a new restaurant in Tokyo :

It's not a place I will be visiting soon.

Link from Keeping Pace in Japan which is another blog on Japan I've recently added to the blogroll.

Update: Here a video from a blogger who actually tried it out: from An American In Japan
Posted by Jon Allen at 10:16 PM 2 comments:

I discovered the Eros Museum of Seoul when I was wandering around the city in the area near the Blue House. 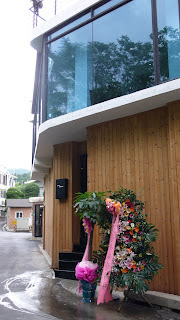 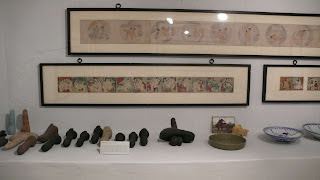 As this is a family friendly blog I will not show you the full image.. 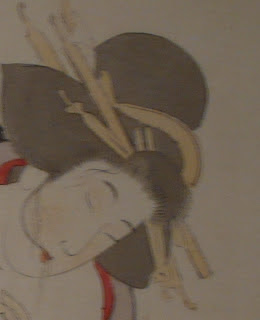 but there are plenty of examples of Japanese 'Shunga' works on display.
You will have to go to the museum to see the rest of the picture.

The museum is open every day except Monday. Admission is 5,000 won. You may not want to the take the children, unless you want to do a lot of explaining. To get to the museum go to Seoul Selection bookshop and continue walking north towards the Blue House. The museum is on the right hand side of the road. The local bus (number 11) from Gwanghwamun stops fairly close by.
The museum printed the name of their website on the flyer, but while they are paying for the domain they do not seem to be running a website there yet.

When researching some links for this blog post I came across the Asia Eros Museum in Seoul which was opened in May 2003 and was mentioned by the BBC at the time as the first sex museum to open in Korea.
Posted by Jon Allen at 10:05 PM No comments: