I went to the Tokyo Big Sight exhibition centre for the Design Festa at the weekend. Over 2,000 local and international exhibitors took part in this extravaganza of art, fashion and design.

The stands showed the artist's enormous imagination in a wide variety of media from oils and watercolours to wire, glass and plastics. Most of the items were for sale: everything including post cards, T-shirts, shoes, bags, clothes, wigs, hats and general nick knacks.

Some of my favourites include A Banana and Cream Facial and a cheeky design on wood. More of my photos on flickr , an excellent selection from lhuga and a 12 second video of some hungry money boxes that eat coins.

The festival happens twice a year and is happening next on the weekend of Oct 24th and 25th 2009.

Thank you to everyone who entered the Prize Draw. The winner has been notified and will receive the last Poken I have from the batch of 12 I bought.

I am planning on buying another batch, so expect to hear more about Poken in the future. 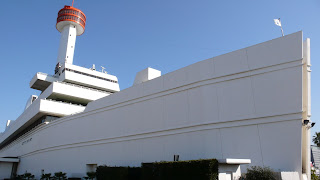 Answer 1: The building is the Museum of Maritime Science (Funenokagakukan).
Situated on the island of Odaiba in Tokyo Bay, this excellent museum holds a large collection of all things nautical. The NY Times reckons you could do the museum in two hours. I've been twice and still not seen half of it. 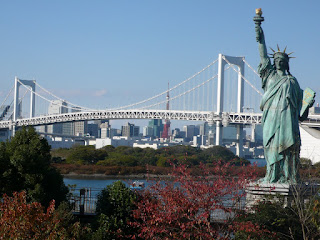 Answer 2: This is the Rainbow Bridge.
Linking the island of Odaiba with the mainland, the Rainbow Bridge was named after its multi coloured illumination . More from the Time Out Guide to Odaiba (The link only seems to work in IE) 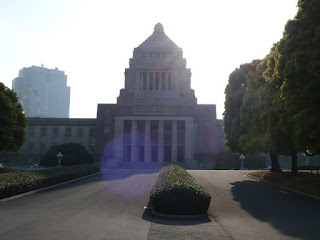 Answer 3: The building is the National Diet Building.
Located at 1-chome, Nagatachō, Chiyoda, Tokyo.
Sessions of the House of Representatives take place in the left wing and sessions of the House of Councillors in the right wing. It was build in the 1930s entirely from indigenous materials. Tours around some areas of the building are available from Monday to Friday. Well worth a visit. 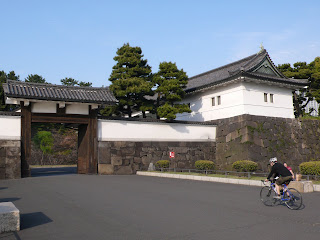 Answer 5: The dog is named Hachiko and his statue stands outside Shibuya station. Hachiko and his master Prof. Uyeno, were inseparable friends. Each day "Hachi" would accompany his master to the train station when he left for work. Upon returning, the professor would find the dog patiently waiting. One fateful day in 1925 the professor was taken ill at the university and sadly died before he could return home. Hachiko waited patiently at the station for his return that day and the next. He continued his daily vigil for over ten years, becoming well known to the commuters passing through the station, until he passed away on the same spot he last saw his friend alive. [Abridged version of the full story from here.]

I hope you enjoyed the quiz. I may run another one. Any input is welcomed.
Posted by Jon Allen at 10:19 PM 3 comments:

Just two days left to enter the Tokyo Photo Quiz. I have extended the deadline for entries by one day. You now have until 9pm Monday 11 May to send the answers to me.

There have been ten correct entries so far. Last chance to get your thinking hat on, answer the five questions about the photos of Tokyo and email your answers to enter the prize draw to win a Poken.
Posted by Jon Allen at 6:43 PM No comments: