I went to Akihabara this weekend. My original intention had been to visit the transport museum that I had seen direction signs for on a previous visit. Foolishly I had not checked further into this institution, so when I followed the signs I was dismayed to see a large "Closed" sign and an explanation (in English) that the museum had shut in 2006. It has moved to a brand new site in Omiya, and it's the museum I'd already visited!

The day was not wasted as there a street festival on. The main road was blocked off to allow various artistes to perform. Hanger Man was very entertaining juggling on a unicycle and doing tricks with a tennis racket : 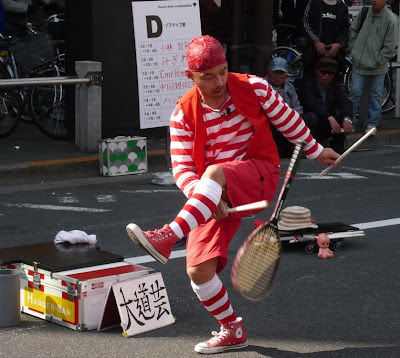 I've just discovered he's was at the Seoul Buskers Festival in 2007 and he was popular at the Edinburgh Fringe festival.

This gentleman wasn't part of the entertainment, as far as I could tell, but I had to take a second glance to make sure I wasn't seeing things. Man and rabbit moved as one : 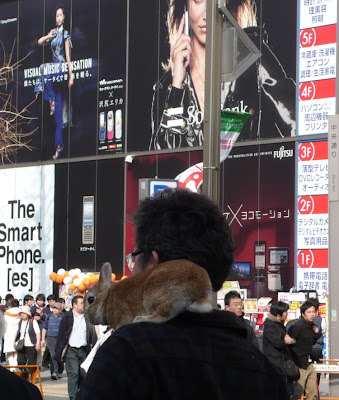 It's still not as good as Mike's Lady with an Iguana on her head though.

Akihabara is full of boys and men interested in all the technology available, so what better way of getting their attention than some scantily clad girls: 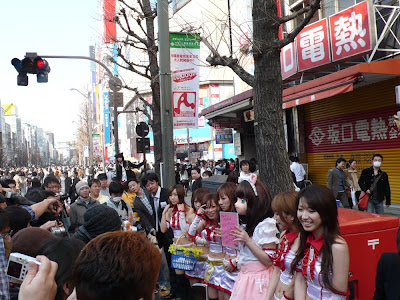 As you can see they were very popular, but I've got no idea what they were promoting. Does anyone recognise the figure in the middle?

There were a lot of small groups singing and dancing, but in general the quality of the entertainment was not as good as last week in Yoyogi park.
Posted by Jon Allen at 9:55 PM

Hi Jon,
Thanks for the comment; great site, looks like you're enjoying life in Tokyo. Adding you to my blog roll as well.

Is it the fact that those girls are scantily clad, or that they resemble some manga/anime character that grabs those boys' attention?