This morning at 7:30 the 246th Starbucks in Tokyo opened without any fanfare, in Yebisu Garden Place Tower. 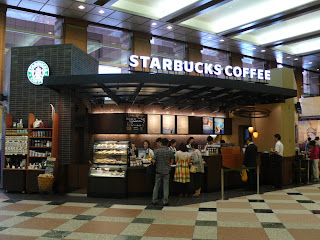 It's only five minutes walk from the Starbucks at Ebisu station. 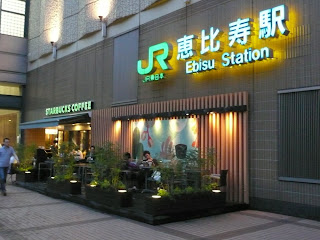 The new outlet provides the usual selection of coffee, tea, chocolate and some bottled soft drinks. A display cabinet holds pastries and sandwiches. A short cafe latte costs 320 Yen. Unlike the convenience store next door and the Starbucks branch at the station, they do not accept Suica electronic pre paid cards which is not very helpful. Around the side is a small area with some armchairs and small tables.

The three cafes already providing coffee to take away are going to have a serious competitor right in the middle of the Yebisu Garden complex.

Least to fear is MacDonald's. A small cafe latte costs 210 Yen. The queues when this branch of the Golden Arches opened last year went round the block, but they weren't there for the coffee. 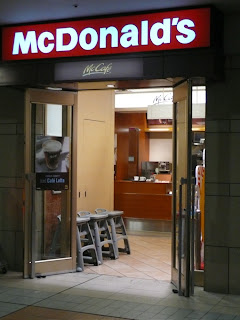 Excelsior Cafe has a branch in the building. It's a well known chain around Tokyo. It was created in 1999 by the Doutor coffee company to compete with Starbucks after the American chain first arrived in Japan in 1996. Excelsior serve a range of other beverages including beer. The large cafe with some outdoor seating is going to continue to attract people who like to sit down in a venue with more space and a bit more choice on the menu. 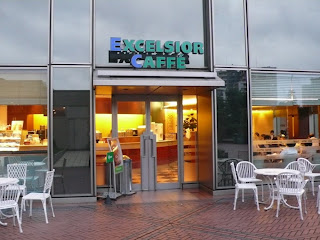 Benugo's has to most to fear from the new arrival. 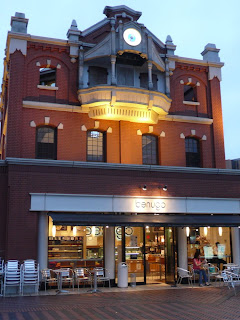 A small cafe latte here will set you back 330 Yen. However a 10% discount is available to people who work in the tower. They have a small indoor seating area and some tables outside. Their speciality is hot sandwiches something they started in 2003. Their eggs benugo is a firm favourite of mine. [The interesting article from the Japan Times describes Pret A Manager as their biggest competitor when they started but Pret a Manger pulled out of Japan in 2004 after their 50/50 partner Macdonalds withdrew from the project.]

Some other interesting research I found comparing Starbucks and Excelsoir in 2002, and a good personal summary of some of the the other chains in Japan from Japan-Zone. For me, I'll probably buy the coffee from Starbucks, but go to Benugo's to eat, I just hope they stay in business. What's your favorite coffee shop?
Posted by Jon Allen at 10:43 PM

We're well aware of this in HK... there's even a significant event for it...

thanks for this post...stumbled on it from blog-surfing and brings me many wonderful memories of Tokyo...i really liked the Ebisu Station and Ebisu Gardens area..its actually one of my favourite suburbs in Tokyo, like in my top 3!!:-)

I don't care for Starbucks.

I like McDonalds coffee...or even Doutor.
Taste good...and good price.

one year old today.
All the old competitors are still there.