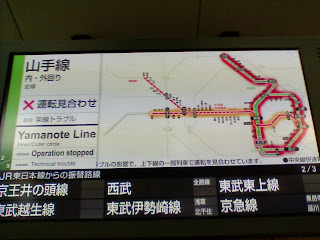 Update: it made the front page on the Japan Times printed edition today with a photo of some people being helped off a stuck train. The root cause was an obstacle hanging from overhead wires. More than 2,000 commuters were trapped on trains in the incident that lasted 90 minutes.
Posted by Jon Allen at 8:10 PM

you could just walk from ebisu to shibuya in about 30 minutes :)