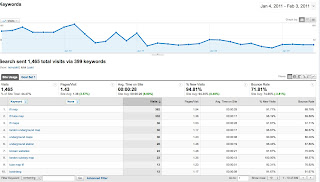 In the post I had a link to a diagram showing all the cities which have, are building or are planning to construct an urban rail sytstem, arranged in the style of the London Tube map. I also included a link to the real map on the TFL Website to compare. So how come my blog rates higher than the real TFL site for their own image? Go figure.
Posted by Jon Allen at 12:13 AM

Ah, so you maintain JapanBlogList :). I was wondering if there was a basic list of blogs already on the list over there? I was trying to browse it the other day for suggestions but couldn't find any. It seems to only show a list of the newest posts from various blogs, stretching all the way down the page.

Ah, never mind. It seems to have changed now. I still reckon you should do a page where you list the blogs with a brief description or keywords to help people searching though :)

But it's quite a task, with just short of 300 blogs listed so far and more being submitted all the time, I'm only just able to keep up..

I am starting to wonder if the real reason why Google is not more transparent as to how it indexes pages is not simply because it is a bit dodgy :) Good for you though!