Gyeongju, not to be confused with Gwangju, Jeonju or Jeju, is the ancient capital city of the Silla Dynasty that ruled parts of the peninsula for nearly a thousand years from 57 BC to 927 AD. It is a popular tourist destination due to the large number of historic sites in the area.

We caught a KTX train from Seoul station and, with a change at Dongdaegu to a local train, the total journey time was just over 3 hours. The tourist information office at the station provided us with an excellent map of the area and we soon found our way to the guest house Sa Rang Chae which we'd booked earlier in the week. On the way we could not help but notice the prevalence of Gyeongju 'Bread' shops. Intrigued, we stopped at Hwangnam where we could see them making the cakes behind the shop counter and so we bought a box. It's not bread at all but pastry filled with Korean red bean paste, it made a very tasty breakfast snack.

We took a 20 minute trip on the local bus (number 11) to Bulguksa. Statues like this are common at the temple gates. They guard against evil spirits. 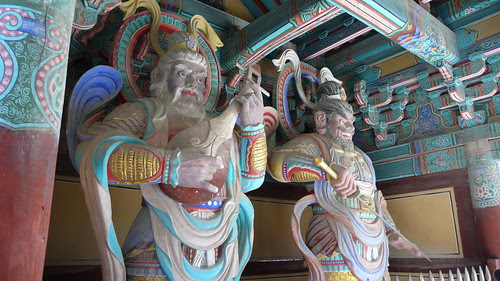 Inside, the temple is dominated by two pagodas. This one, Dabotap, is a particularly unusual design 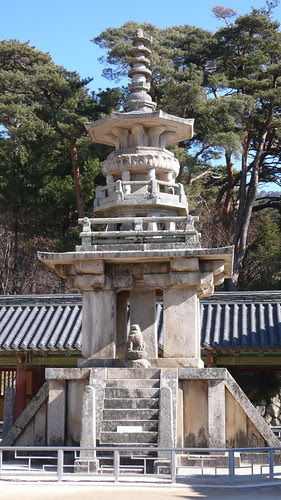 After lunch at one of the many nearby restaurants we took the bus to the Seokguram Grotto to see the statue of Buddha. This remarkable granite sculpture carved in 775 was an inspiring sight.

The number 11 bus takes a different route back to the city centre so we passed through the resort area around lake Bomun before alighting near Cheomseongdae an astronomical observatory. 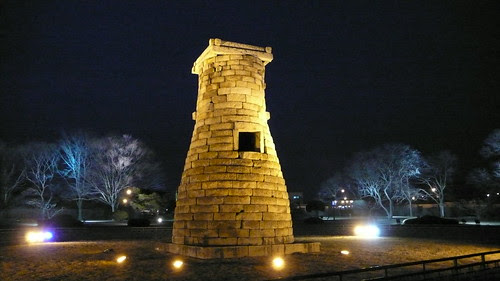 The next day we visited the Daereungwon park which is packed with 23 tumuli of different sizes and shapes. They are the tombs of the kings of Silla. The tomb of Cheonmachong has excavated and is open to the public, we could see how the tomb was constructed inside and replicas of the crown and other items found were on display. 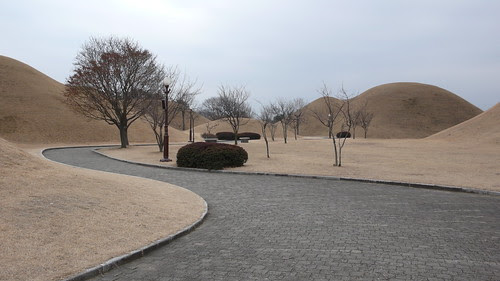 We were also lucky enough to watch a ceremony in front of one tomb. We didn't ask anyone what was happening, but just watched and enjoyed the short and colourful event. 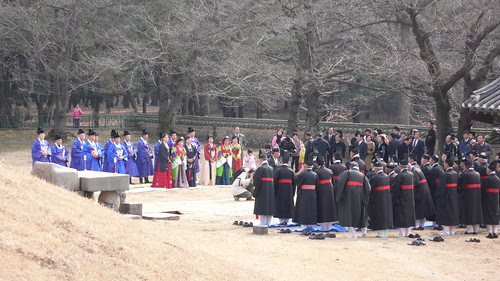 The Gyeongju National Museum was a short walk away and we spent some time in the three large buildings which contain artifacts from the tombs and elsewhere in the area.
Our meal in the evening was in the Kuro folk restaurant. There was a set menu, for 8,000 won we were given 33 separate dishes! They all arrived at the same time and laid out very quickly by the waitress who literally run between the kitchen and tables.

On our last day we went to the Namsan area. The path up the mountain was busy with visitors keen to see the buddhas carved into the rocks. We walked along the base of the hill, which was much quieter, and saw two smaller temples and more tombs. We took a bus back to the station for the train back to Seoul after a very enjoyable weekend trip.
Posted by Jon Allen at 8:12 AM