The joy of Google Translation and other comments

I have used Google Translation service many times and it usually gives enough information to give you a rough idea of what the Korean text is about. This time it came up with something quite unusual. It is a translation of a page from the Immigration web site
and the first paragraph comes back with :

The advance booking which leads the Internet of Immigration Bureau civil affairs administration sells in advance, aviation volume or the theater ticket hospital medical treatment reservation date and the time when it is convenient the civil affairs official does under visiting the man with underdeveloped genital organ together home page leads and it is a system which it has reserved.

Quite how an organ got in there I cannot figure. I don't know what the translation is like from English to Korean but here's a link to see what this blog looks like in Korean.

A letter from the spokesman of the Association of Korean Oriental medicine in the Joong Ang daily caught my eye. There has been a great deal of coverage about the Free Trade Agreement (FTA) with the U.S.A. Inspite of the Koreans having their strategy leaked to the Americans they are gamely continuing the talks.

One sticking point is the issue of opening up the market for practitioners of Oriental Medicine from the US to come to Korea. Choi Jeong-Kuk is understandably worried about Americans, who have only studied for three years, coming here and "threatening public health". Korean doctors have to take a six year course to qualify.

But does he really need to worry? Take for example acupuncture. There are 22,671 licensed acupuncture practitioners in the US. How many do you think can speak Korean? Because lets face it, you could not work here in Oriental medicine speaking only English. Lets be optimistic and say 0.1% , about 20 people. How many of them do you think are keen to give up their comfortable life in the States and have suddenly decided "Korea is the place for me". Two people? Where do you think they are going to get jobs? In one of those 10,436 Oriental medical clinics? Well lets say one of these clinics gives them a chance and they get hired. Do you think any Koreans are actually going to go to an American for Oriental medicine anyway? I don't think so. Mr Jeong-Kuk: I really don't think the Americans are coming to get you. Open the market, set quotas so that you cannot be overwhelmed and see how many doctors actually come.

The leading article on Smoking Kills discusses the lawsuit filed against KT&G (Korea Tomorrow and Global, this is the public tobacco company previously known as Korea Tobacco and Ginseng) It talks about "KT&G increasing its revenue by selling cigarettes and thus damaging health" and "The government should not increase its tax revenue by causing deadly, painful diseases". But it was only a couple of weeks ago they announced record exports of cigarettes to over forty different countries. So it's OK to damage the health of those smokers in Iran, Lebanon, the United Arab Emirates, Uzbekistan, Kazakhstan and Russia that they are exporting to but you don't want them to increase the price of cigarettes in Korea? It does not matter what the cost of a packet is, a nicotine addict will have to get their fix. Keep on increasing the price, it does not stop them smoking, but you raise more money to look after them when they get sick.

As for the comment about increasing the size of the health warning on cigarettes, how many smokers even notice the warning? The government health warning on cigarettes in he UK covers half the packet, it's only the non-smokers that notice it. Starting a campaign to stop teenagers smoking by saying 'smoking kills' does not work, it's been tried in the UK and failed miserably. Teenagers will always be rebels, if you tell them not to do something they will want to do it. My solution would be to force them all to smoke by government demand. Anyone under 16 caught not smoking 30 a day would be given free cigarettes. You would then be a rebel by not smoking. I can't see it happening, but it's just an idea!


In other news: a rare wildcat, Felis bengalensis manchurica 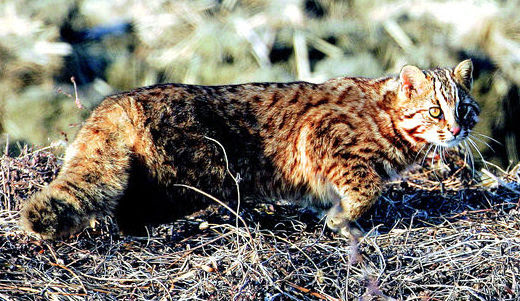 was spotted by an intrepid Hankyoreh reporter in Paju, Gyeonggi Province.

Meanwhile, it's official: Koreans really are one of the most intelligent races on earth.

A British professor has released a map which plots out his dubious claims that some races are naturally smarter than others. The so-called "IQ Map of the World" created by professor Richard Lynn of Ulster University shows the varying intelligence levels of races around the world according to his controversial research.

In his 2006 book "Race Differences in Intelligence: An Evolutionary Analysis", Lynn divided the world into 10 zones and analyzed their average IQs. His results found that East Asians (Chinese, Japanese and Koreans) have the highest mean IQ at 105.

Have been enjoying your blog. I wish to translate the Immigration website paragraph as follows:

"The advance booking via Administration Affairs internet of the Immigration Bureau is a system whereby you can make a reservation for a time and date of your choice for services such as the purchase of air tickets, theatre tickets or for a reservation of hospital treatment visit."

Thanks very much anonymous.

Are there any words in there that might possibly translate into "underdeveloped genital organ". Any idea how google could get it so wrong? or do you think the coders of the translator are having a laugh?

Firstly I may have misled you as it should read: "The advance booking via Administration Affairs internet of the Immigration Bureau is a system whereby you can make a reservation for a time and date of your choice for your visit same as booking for air tickets, theatre tickets or a hospital treatment visit."

As for the underdeveloped genital organ I fail to see anything remote to that in the website wordings. I wonder if the google is suffering from a typical male organ "size" problem. I hear people saying "size does matter" though.

고자 alone is a man with "underdeveloped genitals"

I wish to put in my 2c to set the record straight.

It seems a case of simple translation of word for word, taken out of context, by Google. "Ha" means low or lower part and "goja" means the anatomical description as mentioned. However the words all together means "wish to". Obviously one needs to use the Google service with a bit of grain of salt.

All the best for your continued blogging.

I saw this on another blog: http://tokyo-girl.blogspot.com/2006/10/china.html

It seems Google aren't the only people having trouble with language translation...This one's from China.

Affiliate Marketing is a performance based sales technique used by companies to expand their reach into the internet at low costs. This commission based program allows affiliate marketers to place ads on their websites or other advertising efforts such as email distribution in exchange for payment of a small commission when a sale results.