As you may have heard, Microsoft has just launched Windows Vista in Korea and around the world. However most Koreans will be leaving it well alone for the moment due to the number of Korean websites that will not work with the new operating system.

Stafford and ZDNET have some more details as to why Vista will not work with a number of Internet banking sites. The banks affected are expecting to have updated their websites within the next few months to allow Vista users to be able to use them.

There were some complaints earlier in the week about the high cost of the software in Korea compared to other countries, but it was revealed that the higher cost was due to the Korean vendors adding a hefty markup. [The story is in the bottom left hand corner, I don't seem to be able to find the story on their site.]

I made a trip to the Yongsan electronics market area today to see what impact it has made on the plethora of computer shops there. This was the largest poster I could see : 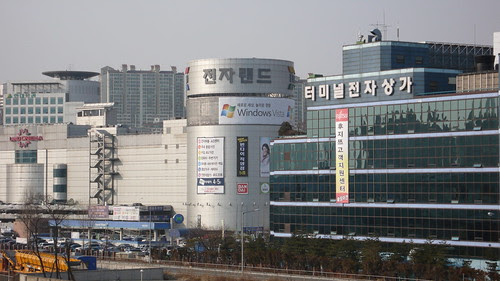 Wandering around the hundreds of shops in three different malls, Vista was available on some new machines, maybe 2-5%, but by far the majority of computers were on sale with Windows XP. There was not a great deal of publicity for the new operating system and I had to look quite carefully to see which machines were running it. The new LG X-Note machines running Vista were the most prevalent, and Samsung had Vista based offerings too.

I could not find Vista as packaged software for upgrading existing computers and the two vendors I asked both said it won't be on sale until Feb 7th.

Mac users with Intel machines will be able to install Vista if they are really keen.
Posted by Jon Allen at 7:00 PM

I recently read an article about the problems Vista has with conducting secure transactions. It has to do with the Korean government building its own security standard, with direct help from Microsoft. Rather then using an open standard like the majority of the world and Vista use. One again the Korean government is working directly with Microsoft to fix the problem they created.