Can you dig it?

Readers may be familiar with the site digg.com where website links are submitted by users, other users see the link and if they 'Digg' it enough it will get on to the front page.

The Koreans have noticed this and, since digg.com is English only, have created their own version kligg.com. It's only in beta at the moment, but it may catch on. For Korean readers it may be of interest to you.

I put it through google translate and most stories seem to be technology related, but it did have a link to the photos of Daegu in 1954 that have been referred to on The Marmot and other blogs.

Whenever I see 'Digg This' links I think of a song which includes the lyrics 'Can you dig it, oh yeah' however I cannot find who sings it. I have found various songs either titled or including the phrase, but none of them seem to be the song. It may be The Mock Turtles, but I've not found an online recording of it. Does anyone else know the song I mean?

Meanwhile I'll leave you with a photo of these Korean digestive biscuits : 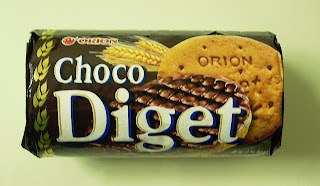 Hmm, I'm having comment posting problems.....it seems to be getting confused between my blogger id and the stupid google one that it wants me to use....anyhow, I know the Mock Turtles song to which you refer and it's certainly the song that came straight into my head. I believe Robbie Williams also did a song with a similar line in it (Rock DJ?)

I am a frequent user of digg.com ...it's a fun site to waste time! But this kligg.com site is hilarious though!

I submitted your story to digg. Hopefully you will get DUGG!

Thanks Daeguowl. I just need to find a recording of the Mock Turtles song now.

When I hear, 'can you dig it?' it reminds me of the singer character in 'The Stand.'

Went to the kligg.com page via Google translate - funny. For the login page it reads, 'it remembers' next to the password box. The registration area reads, 'It joins.' Silence of the Lambs-like.

Slippery fingers on the keyboard again huh? (mind you D and K are some distance apart aren't they.)
Choco Diget = mana from heaven

I believe you are thinking of the song "Grazin' in the Grass" by the Friends of Distinction.

The Friends of Distinction were a sunshiney pop-soul combo whose big 1969 smash was actually a cover of an instrumental tune Hugh Masekela had a hit with the year before, but with lyrics. And what great lyrics they are, just try saying "I can dig it, he can dig it, she can dig it, we can dig it, they can dig it, you can dig it" really fast after a few beers. They don't write 'em like that anymore.