From the Chosun Ilbo
Rhee Seung-chul, the head of plastic surgery at Hanil General Hospital, has created an image of the perfect Korean man from the faces of 16 Korean Wave stars. 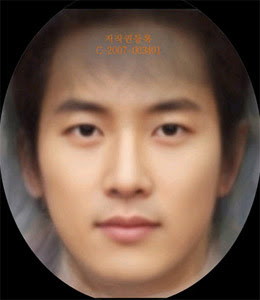 [photo from Chosun site] Does it look like anyone you know?

Jung Ji-hoon in that list, better known outside Korea as Rain, has hit the headlines again today. He had earlier this month disappointed a lot of fans by cancelling all but one the US concerts in his world tour. The only one left was scheduled for 30th June in Los Angeles, but this was also cancelled at very short notice only hours before he was due to go on stage. Poor Lad, after all that publicity he got being spoofed on the Stephen Colbert show. I hope his next tour is more of a success.
Posted by Jon Allen at 10:17 AM

My wife says he's ok looking but not her type...interpret as you will. btw noticed there is a direct bus from youido to Bangbae (can't remember the number though) so we'd better decide on a venue for Weds.

The thing that makes someone attractive is what makes them unique. What in the world is unique about that?