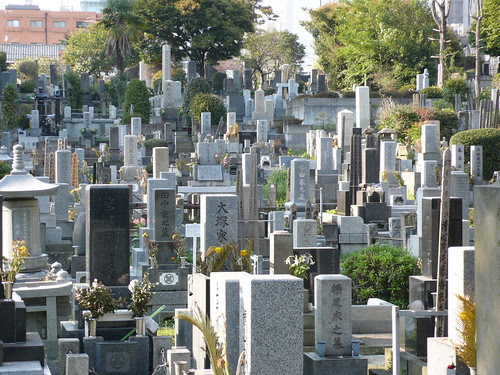 I recently discovered this quiet oasis while on a bicycle, riding at random around Tokyo. Aoyama Reien is one of the largest cemeteries in Tokyo, just a few minutes from the noise and skyscrapers of Roppongi. And yet, you can hardly hear the traffic, and there are very few people around. Even on a bright Sunday afternoon the place was almost deserted. 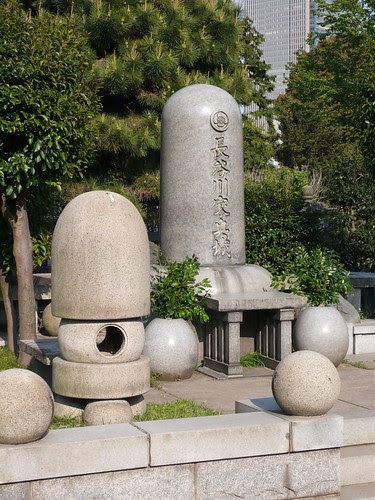 What makes this cemetery unusual is not only the size of it, but also the park-like layout. Wide spaces between the graves and trees and bushes make it unlike the majority of Japanese graveyards which are normally small and tightly packed with graves.

First opened in 1872 Aoyama Reien was the first municipal cemetery in Tokyo. Many famous people are buried here include General Nogi Maresuke, a war hero who joined his leader in death by committing suicide when Emperor Meiji died in 1912. Many noted foreigners who came to help modernise Japan in the Meiji era are buried in the small foreign section of the cemetery. A list is maintained at the Foreign Section Trust website, a small group dedicated to preserving the area. 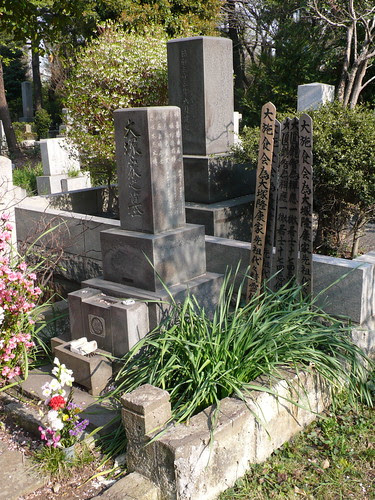 I just missed the Sakura by a week when I was there, you can just see the tail end of the blossoms in some of the photos. 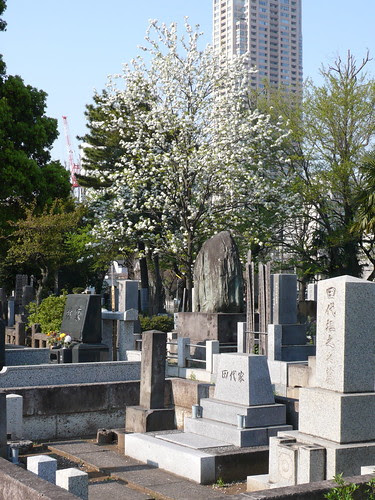 But, if you look closely, this month the native dandelion species Shirobanatanpo are currently in bloom.

The full set of photos is here on flickr.

This is my entry in the Japan Soc Blog Matsuri. Ken at What Japan Thinks is hosting this months carnival on the the theme of Slow Times in Japan. Aoyama Reinen: It does not get much slower than this.

View Aoyama in a larger map

Update: 4 days after writing this post, I opened the Japan Times to see an article describing how an interest in history and literature has recently generated a large increase in visitors to Japanese cemeteries. Books featuring tomb tours have also been published, prompting more people to visit cemeteries.

"Sotai Shimashou" ("Let's Clean Moss"), a book published last March by Shueisha Co., features graves of historical figures and Japanese history. According to an editor, the first edition sold 10,000 copies. . So it may not be such a quiet option for much longer.
Posted by Jon Allen at 11:36 PM

Email ThisBlogThis!Share to TwitterShare to FacebookShare to Pinterest
Labels: "Things to do", japan, japansoc, tokyo

interesting and unusual post. Thanks for sharing especially the pictures!