I chose a different entrance to the park for my second visit to this park just north of Seoul and I tried to follow the directions for a suggested hike up to Dobongsan from the Lonely Planet guidebook.

Leaving the warm and cosy apartment I ventured out into the chilly autumnal air and caught the trusty 61 bus to Daebang metro station for a line 1 train to Dobongsan station. I had to change trains at Chang-dong as the one I caught did not go to the end of the line. (As predicted in the guidebook it was a 45 min journey from City Hall station.)

Following the other hikers through the market outside the station (I've never seen so many outdoor clothing and equipment shops) I came to the ticket booth and paid my 1600 Won entrance fee (approx 90 pence). Turning right at the first path junction I began my ascent. It was a good decision as the path was steeper and much less popular. As it got higher the path became very variable, sometimes very obvious, at other times I am sure I was completely off the path. There were occasional signposts to reassure you of the general direction, but often it was not clear at all where the path went and it was also difficult due to the heavy leaf fall obscuring the track.

The number of hikers, not huge to begin with, reduced the higher I climbed until at the top of the ridge I only met about five or six people in an hour. The weather brightened up a bit but the wind at the top of the ridge was fierce. The light was not very good so the photos have not come out very well. This was the best of a bad bunch but it does show the huge urban sprawl that is Seoul and the number of tower blocks there are: 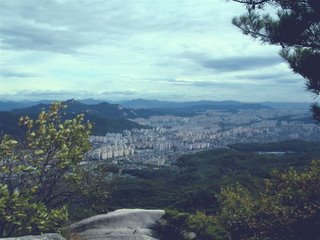 However there is still not enough housing and they are planning on building a new town.

After three hours hunger, fatigue and strong wind I was persuaded to start the descent. I got fairly close to the top and the peaks were a difficult climb from that point onward. There was a suitable path that led down a different route back through a valley and I arrived back at the ticket booth after an hour and a half.

The wildlife count was not very high: I saw chipmunks again and a couple of squirrels. There were great tits, marsh tits, a thrush, crows, rufous brown doves and the ubiquitous magpies.

Walking down I had visions of a delicious bowl of bulgogi soup, but this was where my lack of Hanguel and Korean let me down. There are numerous restaurants right outside the park so after wandering round I settled on one that looked busy. When the waitress asked for my choice in Korean and I replied in English she smiled and shrugged, she pointed to the first item on the list and I blindly agreed!

The starter dishes were very good. For those not familiar with Korean food you are normally presented with three to five small dishes after you have ordered. In this case it was raw cabbage with mayonnaise, cabbage kimchi, another green kimichi with lots of stalks, a liquid kimchi and a brown bean dish. The main dish when it arrived was a brown bean soup with lots of green leaves that I've had before. It was tasty and very warming after the hike. I finished two of the side dishes and resisted twice getting them refilled, the third time I thought she was just going to clear them away, but she returned with them refilled which is normal practice if you finish a side dish! I've still not figured out how they decide when you've finished the meal and stop trying to refill the side dishes. I ate the refills anyway as they were so fresh and tasty and all this for 6,000 Won. (Less than £3.) Update:I should have read this first.

Suitably refreshed I returned to the metro and slept most of the way home through the rush hour traffic, waking up in time to leave the train at Daebang and get the bus home again. Of course the next day the weather was much brighter and sunnier. Ah well.
Posted by Jon Allen at 11:54 AM

You got a good deal, I went out for a Korean dinner in London and it was 51 quid for two and we didn't eaxactly go overboard....