Coffee morning at the Ambassador's

Being a House Husband; Trailing Spouse; or Gentleman of Leisure, as I’ve been describing myself, I thought it about time I attended a coffee morning. I discovered the British Club of Seoul had been invited to the British Ambassador’s for a coffee morning organised by the wife of the Ambassador in aid of Macmillan Cancer Nurses as part of their Worlds biggest coffee morning event. 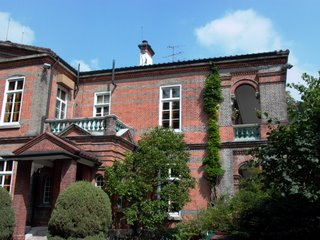 The brick and granite building was built in 1890. Located beside the Toksugung palace in the centre of Seoul it is a remarkably quiet and tranquil spot. Admiring the grounds it was easy to forget you were in the middle of such a large city.

I arrived promptly at 10am at the Embassy and had my named checked off on the list of registered guests. Following another guest I walked round the modern Embassy building to the Ambassador’s residence. We were met by Pam, the hostess, on the lawn where there was a wide variety of cakes and fruit laid out. The butler serving coffee and tea has been working at the house for over 25 years. I met a number of ladies and several gentlemen and discussed life in Seoul; skiing; where else people had lived; other organisations etc. I also met several of the Embassy staff who came out to enjoy the cakes and the sunshine in the very well kept garden.

I was disappointed not to win anything in the raffle. The prizes included: Champagne, a jar of Branston pickle and some cuddly toys. Warwick Morris, Her Britannic Majesty’s Ambassador (as it says on his business card) dropped by for a short while. I was delighted to be able to speak to him and we discussed some of the delights of getting a job teaching English out here.

This week is Chusok holiday in Korea, a thanksgiving harvest festival where everyone goes back to their families, so The Bat gets some time off from the school and we are getting out of Seoul for a couple of days. Not as many days as we would have liked as we were not aware of the exact dates and significance of the holiday until quite late, so by the time we came to book our tickets all the train seats on the way back on the Saturday and Sunday of the weekend had already been sold. So we have to come back on the Friday.
Posted by Jon Allen at 6:26 PM

Being one of the Americans who (to my own chagrine)has stereotyped British society, I would certainly have thought it would be a tea, rather than coffee event. It sounds like a fascinating experience, and I only wish you could have walked away at least with some Branston picles.

If it had been in the afternoon it would have been tea :)

But did they have Ferrero Rocher?

No. I did drop that into the conversation but either he missed it, or chose to ignore it :)

I heard from a girl I walked to the subway with, that at another ambassadors party for charity they got him to pose for a photo with a box of the chocolates!

[For those not in the UK, there was a very popular advert for that brand of chocolates with a butler bringing in a pile of the gold foil wrapped sweets to an ambassador.
It must be on You Tube somewhere!]

You've been describing yourself as a "Gentleman of Leisure"? In the US, that's what pimps say their profession is!

Thanks Max. I'll bear that in mind!
I prefer the PG wodehouse version :
http://www.amazon.com/Gentleman-Leisure-P-G-Wodehouse/dp/1585673919