I've been a bit late in writing up our weekend trip to Gangwha Island and I see one of the other guests on the trip, Tony McGregor, has written a very good summary of the day in today's Korea Times. It was another tour organised by Seoul Selection and Korea Arts Council, the last in a series of four. We really enjoyed the previous trip to Jeonju and this one proved just as good.

Gangwha island lies at the mouth of the Han river that flows through Seoul. It has been the scene of many battles between the Koreans and invading forces including the Mongols, who invaded 7 times between 1231 and 1258, the French and the Americans. The history of these battles is explained with maps and large battlefield dioramas in the Gangwha History Hall. It's an excellent small museum just the other side of the northern bridge joining the island to the mainland.

It was then on to Chondung Temple, one of several on the Island. It is surrounded by fortress walls and we walked around the perimeter to admire the view and hear of its history. After lunch, also at the temple, we were treated to three traditional musical performances.

I have to admit the Butterfly dance was not one I could really get into. The piercing horn music and the very delicate and subtle moves of the lady's feet were lost on me. 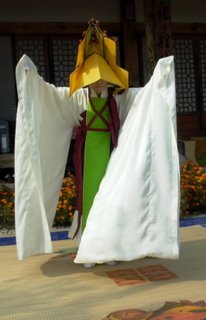 These two guys were good on the komungo and puk (zither and drum). 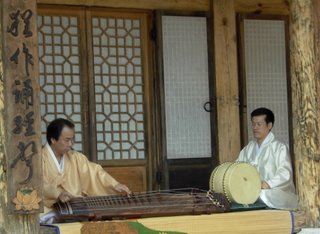 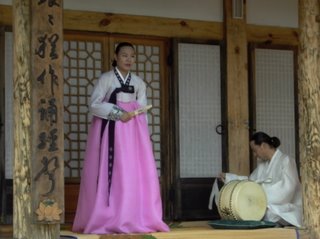 The trip was originally planned to be a visit to Songgwang-sa and Seonam-sa Temples in the south of the country, but due to "a dispute between rival monks at Seonam-sa Temple" a change to the event was executed in very quick time by the organisers. Well done indeed for pulling together the day so well. Once again the organisation was spot on. We hope another series will be forthcoming.
Posted by Jon Allen at 6:30 PM

Photo of the butterfly dance is lovely ...