As earlier indicated we went on a templestay trip to Haeinsa near Hapcheon, South Gyeongsang Province to visit the temple and see the festival. The group consisting of approx 60 people of many different nationalities set off by coach from the Jogyesa temple in Seoul.

We arrived in the afternoon and after a very good lunch we went to the temple
to receive our monks' robes and learn how to conduct ourselves around the temple; how to perform the Ju-doo (half bow) and the Oh-che-tu-ji (full prostration) and how to hold our hands in hap-jang and cha-soo. We then took part in the evening Yebul (ceremonial service) and followed the other monks in the ritual.

The evening activity was making lotus lanterns, gluing crepe paper petals onto paper cups. A simple activity which the group enjoyed a great deal; the variety and skill displayed was varied and impressive and it was very difficult to judge which was 'the best'. The men stayed in one hall and the ladies moved to another hall for the night. The electric ondol (underfloor heating) kept us warm and the blankets and padding were comfortable. Lights out at 9pm.

Woken at 2:30am we heard more drumming on the Dharma drum before going into the temple for the early morning Yebul of chanting and bowing. We performed the 108 bows (one for each of the sufferings encountered through the life stages) a physical challenge I managed without too much trouble but one that was too much for some.
Our meditation was done outdoors sitting on cushions on a large stone circle around a sculpture. The walking meditation around the circle in the starlight was quite mesmerising, I was just getting into a trance when we stopped. The atmosphere of calm and tranquility was then completely destroyed when we were told to relax and do what we wanted, so everyone started taking flash photos.

After a simple breakfast of rice and vegetables taken in silence in the temple canteen we heard a lecture on the history of the temple and the Korean Tripitaka. These 80,000 wooden blocks carved between 1237 and 1248 consist of Buddhist scriptures. Designated as a World Heritage artifact by UNESCO. The script of over 52 millions Chinese characters is so uniform from beginning to end that the woodblocks look like the work of one person but experts estimate they were carved by 30 monks.

In the village there were numerous stalls and we had some time to practice woodblock carving, making paper and printing from wooden blocks. The craftspeople on hand to demonstrate were very friendly and keen to let us try out these skills. There were also a lot of wood block prints and carved wooden objects for sale. 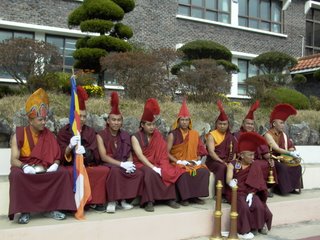 In the afternoon we discovered we would actually be taking part in the parade along with hundreds of the villagers and monks. We were given traditional clothing to wear including woven rice straw shoes for those very keen for authenticity. The festival is to celebrate the arrival of the Tripitaka in Haeinsa from Gangwha Island where the blocks were carved. We were each given a replica block to carry. 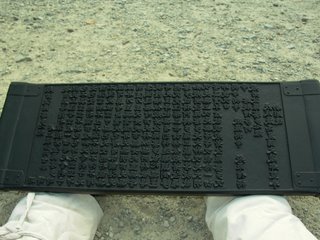 Luckily they were not as heavy as the real thing which weigh 3-4 kgs each. The simple strip of cloth to carry the block behind the back was comfortable but it was very easy to let the block slip out on the floor. The parade was regularly punctuated by the sound of a crash as another one hit the ground. The ladies balancing the blocks on their head were most unimpressed by our apparent lack of respect for them. 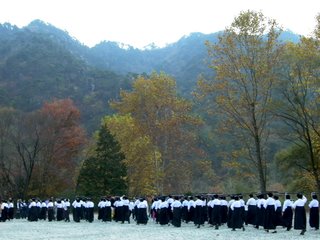 The camera battery died on me at the end of day just before I was able to take a good shot of the real Tripitaka, but luckily many others have already uploaded their photos on flickr here. It is quite remarkable how these wooden blocks have been so well preserved in such a simple looking environment for such a long time. We saw a video which explained how the windows are designed to allow the air to flow around the blocks. The floors have layers of salt, charcoal and lime underneath, which absorb excess humidity during the rainy season in the summer and maintain an optimum humidity level during the dry winter months. It is interesting to note that in 1970 a plan was formed to move the blocks to a modern facility with sophisticated humidity, ventilation and temperature controls. However mildew soon appeared on test blocks stored there and the plan was dropped. Modern science can still not explain why birds do not nest in the buildings nor spiders build webs there. [Though I did see one very small web in a corner of one window.] Lots more information on the Tripitaka here.

It was then back on the bus for the long journey home through the heavy traffic back into Seoul common on Sunday evenings.
Posted by Jon Allen at 6:53 PM

Small country. Not did I just finish studying the Tripitaka (which is better then all the Tripitakas in the world combined), but my friend was at the same festival. I heard I missed some good times. I am enjoying the blog, keep up the good work!