A few months ago we enjoyed the first of BH Production's 'Standup Comedy nights'. Thanks to being on their mailing list I can tell you that in November they are presenting another night of comedy at the B1 Lounge in Itaewon.

Bryan Erwin's comedic appeal is universally apparent: audiences everywhere can identify with his take on life, or as he puts it, "an ongoing series of awkward, uncomfortable moments." His satirical style has been featured at legendary comedy clubs such as the Comedy Store, the Improv, and the Laugh Factory.

Nathan Timmel is known for his edgy, observational humour unmercifully directed at contemporary culture and politics. Nathan has entertained audiences at numerous comedy clubs around the world, and looks forward to unleashing his act on a Seoul audience for the first time. 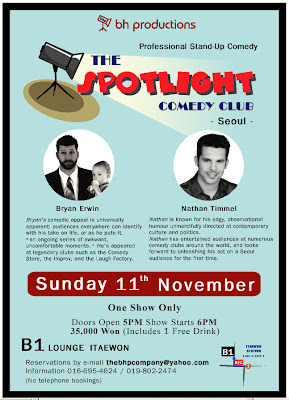 Here's a clip of Bryan on child birth, he sounds pretty funny.

Bryan Erwin "Me, marriage and birth"

I must find some Comedy clubs in Tokyo!