On my previous visit to the Cheonsuman Birdwatching fair I used public transport and it took me five hours to get there. This time we thought we'd try hiring a car and a reservation from Hertz showed that for one day car hire it is almost cheaper for two people than taking the bus. (OK, so we were going for two days, which changes the economics a little, but anyway...)

I duly collected the car from the Downtown Yeouido branch on Saturday morning (the rate of 110,000 won for 2 days was even better than I'd been quoted from the Hertz site) and we set off. Almost immediately we hit heavy traffic, which continued for over 50 km. We finally arrived at 1:30pm after four hours.

We looked round the birding fair and had a delicious lunch including fried fish and fresh prawns, it was just warm enough to be able to sit outside.

Coming down from the embankment into the paddy fields to go birdwatching required taking a different route to the one the bus trip had taken last time. There was an attendant preventing access on that specific track, but the next one along was not guarded. I finally got a good look at the geese and identified them as Bean Geese. At dusk it was an incredible site and sound when the thousands and thousands of them left the paddy fields where they had been grazing and flew out on to the open water to spend the night. We were lucky enough to be right in middle of it on a deserted stretch of track beside the estuary. The noise of their wing beats as they flew over was fascinating.

We struggled a little in the dark to find a way out of the paddy fields back onto to the main road but succeeded by retracing our route. Continuing west we headed towards Anmyeondo and chose a small pension just off the main road south of Bangpo which turned out to be very good value (40,000 won) for a small warm room with a kitchenette area too.

On Sunday we drove up the coast, most of which is part of Taeanhaean National Park, to Mallipo and headed for the Cheollipo Arboretum. Luckily we had not consulted the Lonely Planet guide at this point, because it is out of date and suggests it is only open to members and membership is 60,000 won. In fact it is open to the public for 10,000 won each. This peaceful and scenic little spot was setup in 1966 by an American who bought the land and has lived there ever since, amassing a collection of over 6,500 species of local and exotic plants.

We had another excellent seafood lunch in Mallipo, crab soup this time and had time for a walk around the small town. You cannot really miss this motel : 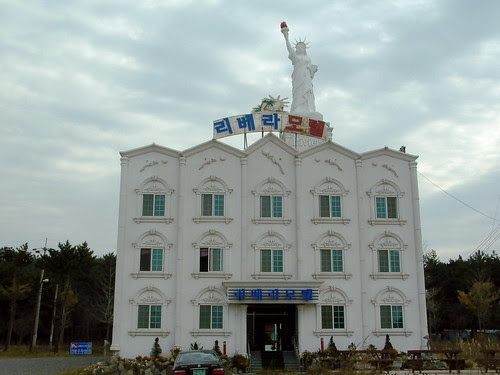 The Statue of Liberty is visible all around the town. The beach here is very nice, I'll bet it's crowded in summer : 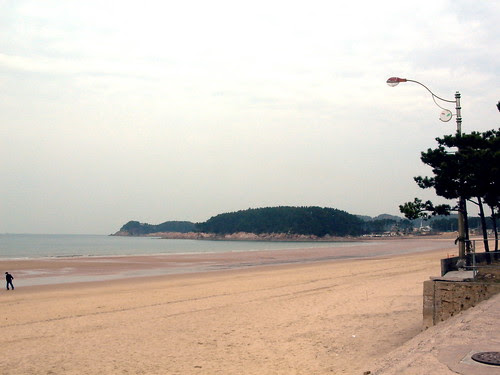 It wasn't actually that bright and sunny, I've enhanced the photo a bit :)
This is nothing to do with Mallipo, but it came out rather well : We set off back for Seoul at 5:30pm and immediately encountered slow moving traffic on the expressway so it took five hours to get home. So it was still faster than public transport getting there, but not on the way back!
Posted by Jon Allen at 8:23 AM