Getting the Kiss off from KISCOM

I've tried several times in the past to access the North Korea News agency website KCNA, having seen links for it in several places. Each time I got a screen like this: 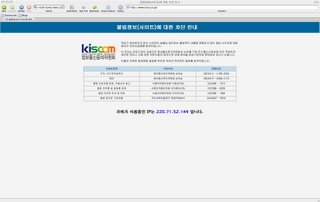 which I'd not really paid attention to. I had assumed that either the site was down, or it had moved or such like.[ I wonder how long the Japanese are going to host it for them?] I finally got around to putting the Korean text through the Google translation tool which did a reasonable job and came back with this:

You connects the site at law to be including the illegal contents which it forbids, the connection against a corresponding site was intercepted to inform, it gives.

This management passes by the mind of information communication ethics committee in request of the charge agency and it follows lawfully, in the telecommunication enterprising law and a thing which will be intercepted with the cotton lower part field star charge agency and there is a doubt fact regarding hereupon and about under meaning of a passage it gives it wishes.

Together for information cultural window month which is healthy request it gives you active cooperation.

Now I didn't quite get all of that, but it seems this KISCOM bunch want to stop me accessing the site. When I mentioned it to Richardson at DPRK Studies, from where I had followed a link from one of his regular North Korea in the news posts, he pointed me to the National Security law. It doesn't explain much, however he did suggest a couple of proxy sites Atunnel,Btunnel etc, which one can conviently use to annonymise one's IP address. Wikipedia has a bit more on the subject.

To paraphrase Francis Urquhart: 'You might think that works, I cannot possibly comment'. But why do the South Koreans not want me to hear that 'him oop north' has just published his father's 65th volume of collected works? (not yet available from North Korea bookshop but vols 1 to 44 are), or that he visited a stock farm?

North Korea is not surprisingly one the 13 countries on the Reporters without Borders blacklist for suppressing freedom of expression on the internet, I wonder how closely they looked at South Korea?

Here's hoping I will be back for another post next week and not reporting from a South Korean prison.
Posted by Jon Allen at 8:25 AM