Keen for a day out at the seaside, but not too far away, we settled on a short excursion to Incheon. The station is at the western end of metro line 1 and it took an hour from our apartment.
Arriving at the small, almost deserted, station we found the tourist information office. There are two different city bus tours, one takes the ferry across the bay to the island where the main Seoul international airport is located. The other one, around the local city area, was just about to depart. So, for a mere 1,000 won each, we joined a bus full of Koreans for the one and half hour sightseeing trip. 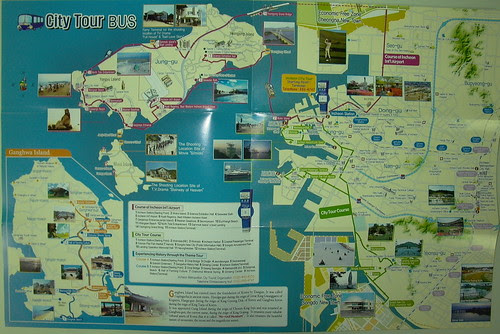 The first half of the tour was around the Port of Incheon South Korea's second largest port after Busan. 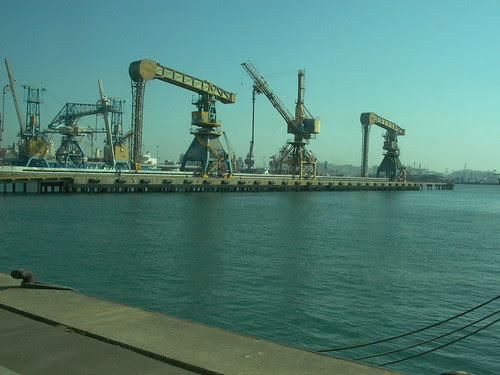 The Korean bus driver kept up a commentary which the rest of the bus seemed to enjoy, sadly he did not make any allowances for us two foreigners. I assume he was giving some statistics because there were lots of satisfied exclamations. Sadly bypassing the New Songdo City public information hall we passed the Incheon Landing Operation memorial Hall at high speed. The bus stopped at Neungheoda and we had 15 minutes to stretch our legs and walk round the tiny park, feed the fish and admire this establishment created out of an old aeroplane: 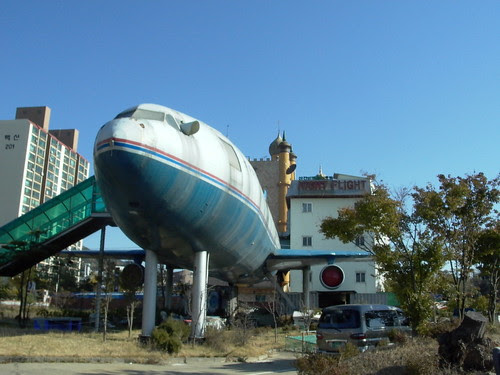 It seemed to be deserted whether it was a restaurant or club or something I don't know.

Arriving back at Incheon station we wandered round Chinatown and Jayo park before getting a taxi to Wolmido which is the seaside promenade area. It's like Blackpool or Brighton with Hangeul! But rather than fish and chips all the restaurants sell sliced raw fish. After long deliberation we settled on one with a sea view and ate a huge a amount of food. Quite unexpectedly we got some of these little wrigglers:

They don't get much fresher than that. They are very chewy indeed, a bit like chewing gum, and you have to be careful to swallow them without them getting stuck in your throat. I made sure they had completely stopped sucking before swallowing.
Posted by Jon Allen at 4:08 PM