I discovered there is birdwatching fair on at Cheonsuman so I decided to take a trip there. The website made it sound easy to reach, so I started my journey on a local bus at 9am. Continuing on via the metro I arrived at the Nambu bus terminal and bought a ticket to Seosan for 6,800 Won. The buses run only once an hour. Whilst killing time with the free information terminal I discovered that bus 461 goes directly to Nambu from our apartment, which may make it quicker to get to in future.

Arriving at Seosan bus terminal at 12:40 I bought a ticket to Ganwoldo. (I'd prepared this time and had some Korean text to show the ticket seller) A friendly local pointed out the correct bus stand to wait at (Stand 17, it's labeled Buseok in Hanguel) when I asked. I tried a 'Bulgogi Burger' set meal from the fast food outlet Lotteria at the station. Suffice to say, I shan't be eating one of those again.

The bus trundled south until I eventually spotted the signs for Ganwoldo; I saw the white tents I assumed held the fair and saw the helium balloons in the sky used to indicate events, so I buzzed to get off the bus and alighted at 14:00. Approaching the white tents I realised they were empty. Continuing round the headland I saw a temple on a small island and observed hundreds of small stalls selling fish and seafood. 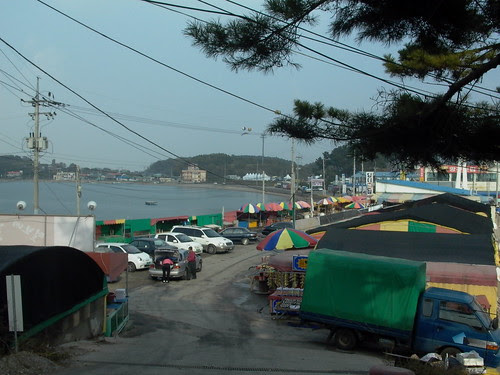 I was dejectly returning towards the main road along the track on the other side of the headland, when, rounding the corner, I finally came across three huge tents, large banners saying 'birdwatching fair', several buses, a large car park and a few people milling around.

I looked round the displays, they had an impressive collection of stuffed birds and a number of very good photos of wild birds, labeled in Korean and English and also including the Latin names. I then heard an announcement, which I guessed to be about the imminent departure of the birdwatching tour advertised on the website. I quickly purchased a ticket for 5,000 Won and hopped onto the coach. The other 14 participants, including a small group of girls who seemed to recognise me from the bus down from Seosan, were issued with binoculars and we set off.

The land behind the embankment that the main road runs along, has been reclaimed from the sea and consists of acres and acres of rice fields on which thousands of birds were feeding. The coach drove slowly down the gravel track between the fields for 30 minutes, with the lady tour leader keeping up a constant commentary and pointing out various things. We stopped at a simple straw shield beside the estuary and were allowed off the bus to see the large flocks of geese on the mud flats. In the distance was a small group of spoonbills. 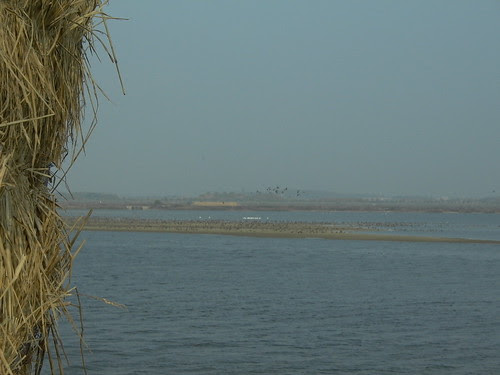 (Sorry the photo is so poor!) After only 10 minutes we were herded back on to the bus and continued north along the estuary before crossing the river and returning at the same speed until finally arriving back at the fair site at 16:30. There were plenty of birds to see, including grebes, herons, egrets, ducks, geese, and moorhens but, because the bus did not stop again I was unable to closely observe anything at all! However everyone seemed to really enjoy the tour and whatever the leader said, kept them interested for the whole trip. When we got off the bus I showed her the page from the field guide with the brown geese on, but it was still not clear to me exactly which of the four species we'd seen in such large numbers.

I asked her when the next bus back to Seosan was: 18:00. After I expressed my dismay she immediately indicated that she was going to Seosan and volunteered to give me a lift. She did not speak a world of English so conversation on the journey was impossible, but I was extremely grateful for her kindness.

I bought a bus ticket back to Seoul. [I still don't understand why you cannot buy return tickets in Seoul]. I saw a bus ready to depart but the ticket collector saw my ticket and would not let me on. After a minute or two of confusion I understood that for an extra 3,000 Won I could get on it as it was an express bus. Great, I thought, home in less than the two hours it took to get here. WRONG. Friday evening is also heavy traffic day it seems. After 2 hours 40 minutes we finally arrived at Kangnam express bus terminal. On the bus the TV was showing YTN (the Korean equivalent of CNN) and amonst other things I saw footage of goats being rescued from some flooded country three times. I finally arrived home at 9pm. All that for 10 minutes in the field with the binoculars! Next time, I think we will try hiring a car from Seoul and driving down there.
Posted by Jon Allen at 11:26 AM

I could use some bulgogi at the moment. I prefer kalbi though.

Thanks for the volunteer info!