As I mentioned before, the Airport railway (or railroad as it prefers to call itself) linking Incheon to Gimpo is expected to open next week, Friday March 23rd. I went along to Gimpo to see how preparations were progressing.

I took the subway from Yeouido, our nearest station, and 25 minutes later I was at Gimpo airport station. Here at the end of the platform, is the link to the new line. 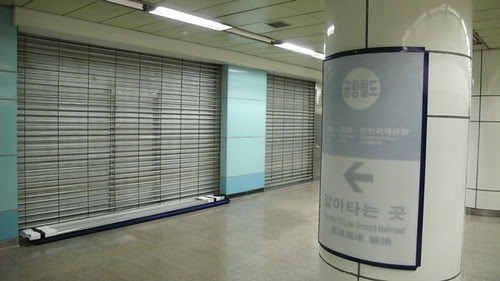 This implies you will be able to interchange with the new service without having to go through another ticket gate, which is good news; but it will be interesting to find out how ticketing works with the possibility of Express or Standard trains. How will they charge you extra if you took the fast train?

Outside, there was still quite a lot of last minute work going on to finish tidying up the station entrances: 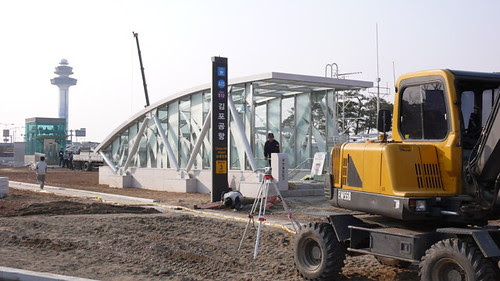 Excavation work continues at three different places for the second phase of construction of the line. 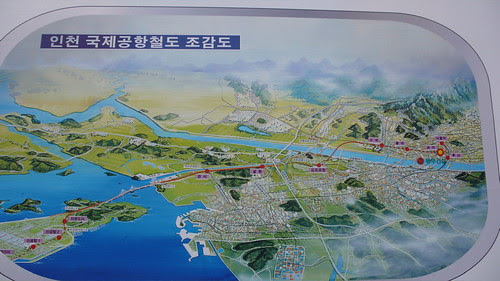 From the underground station at Gimpo the line rises to ground level and heads north to cross the Han river on a new bridge. Matt at Gusts of Popular feeling has some photos of the current state of construction there, and some other photos here.

Once across the river the new line turns east and descends into tunnel at Susaek bridge. The line runs parallel to the existing railway here. There will be a station at Digital Media City for Susaek with connection to Subway line 6 and the mainline railway station. Continuing east, following the route of the previously existing Yongsan railway line, the next station is Hongdae for Hongik University station for connection to Subway line 2.

The new line continues in cut and cover tunnel to Gongdeok for connection with Subway lines 5 and 6. From here the line sweeps north in bored tunnel under the hill to finally emerge on the west side of Seoul Station. 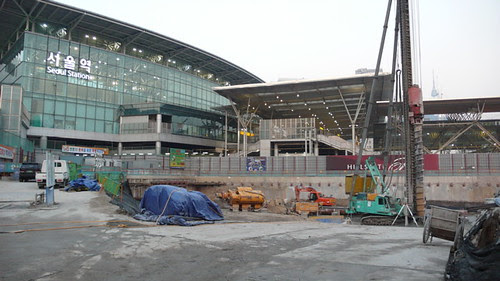 Based on a time of 33 minutes between Incheon and Gimpo and adding on 25 minutes for the Subway, plus up to 12 minutes connection time gives around 70 minutes at best, for the trip from Yeouido to Incheon for 4,100 Won. Compared with the non stop limousine bus on the same route, which takes 45 minutes, you get a seat, the bags go in the luggage rack or underneath, and there are no steps, I think I will be paying the extra 8,900 Won to take the bus.

I observed test trains running on the line from the bus on a recent journey to the airport, they can reach speeds of up to 110km/h on some sections of the line.

According to an old Korea Times leader the government is already expecting to pick up the bill of tens of billions of won when the privately owned railway operating company runs at a deficit. It seems planners were a bit over-enthusiastic forecasting demand for the airport, which is why taxpayers are already paying 100 billion won per year for the airport expressway, run by a private company.
Posted by Jon Allen at 5:05 PM

i have some Korean War-era photos up on my blog, including one of Gimpo airport during the war.