I've not blogged much since we got back from an excellent short break in Tokyo, so here are a few bits and pieces:

Thanks to a reminder from the Marmot I went to a lecture organised by the RASKB last night.
Tariq Hussain gave a very slick presentation based on a book he's just self-published in English titled 'Diamond Dilemma' or, as his lecture was titled, “Brilliance or Breakdown – The Future of Korea Inc.?” The book was published in Korean last year and got some good reviews apparently.

He sees a number of problems such as : excessive Government regulation, rigid social hierarchy, lack of initiative, serious issues with education, and too strong labour unions as some of the most important issues affecting the current state of the nation. I agree with his prognosis that things will only change for the better with very strong leadership. Economists might draw some parallels with Great Britain in the late 1970's and the leadership of Margaret Thatcher. Who will be Korea's Maggie?

Today was "White day" a marketing stunt, dreamt up by the Japanese orginally, to encourage men to buy chocolates for their beloved. Han has a great photo of one of the many stalls setup to cater for last minute purchases by late night Korean men on their way home.

This is one for Brian, the only London Pigeon with a blog. According to a recent item in the JoongAng Daily

In Korea, the word pigeon is often used as a verb. In fact, “pigeoning” refers to putting fabric softener in the laundry. The term was coined because Pigeon is a well-known fabric softener here.

Sure enough you can get some here I did have a great photo of Brian the pigeon when he came to visit, but I can't find it at the moment.

And finally, inspired by ROK-Drop's Where in Korea, No prizes, but who can tell me what this building is, because I don't know! I've seen it several times on the drive out of Seoul. 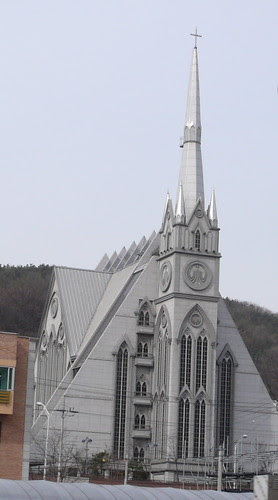 I am thinking Yongin. I think I remember it when I went to Everland.

No, not in Pyongtaek.
San, you might be right, what is Yongin?

It is on right hand side of the expressway on the way out of Seoul on the way to Everland and Seoul Folk Museum.