Cherry blossom in Yeouido. This was the scene Saturday with a merry band of drummers. 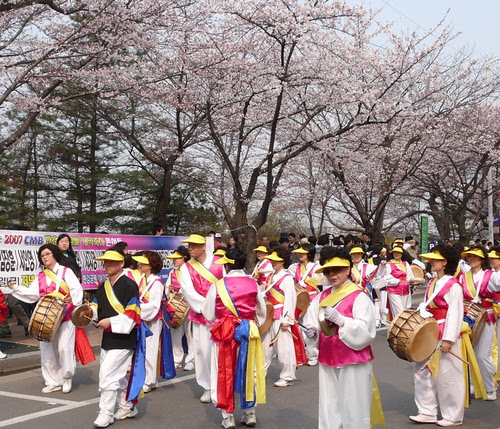 For those interested in the flower arrangements I mentioned before, here's a sample of twelve I uploaded for your amusement. They are from the Bangsik Florist Meister Schule in Seoul. It's a kind of Ikebana meets Bauhaus style where rubber gloves, perspex and tin cans are all components in the constructions.

This was the drumming group that opened the Korean traditional music festival on Friday night. 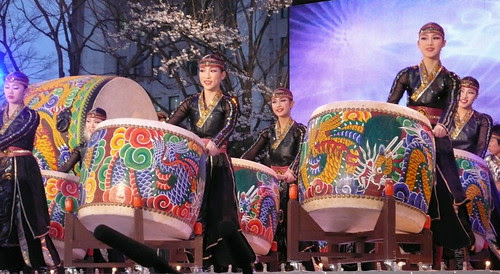 It was an excellent performance including Pansori, a fan dance, a fusion band and traditional dancing. One group we particulary enjoyed was a trio of three young ladies who played Kayagum (traditional harps) and a Haeguem (two stringed zither). One of their songs was a very catchy little tune, the chorus sounded like they were singing 'Whitmann Soggy'. The programme says they are called 'IS'. Does anyone know anymore about this group of three girls. I took a video of the song, apologies for the poor camera work.

The show was broadcast by KBS-TV and also covered by National Assembly TV who were very keen to interview us because, she told us, we were the only foreigners there. Modestly we declined her request, twice.

The cherry blossom trees were illuminated until midnight and the streets were still crowded with Koreans enjoying the atmosphere. 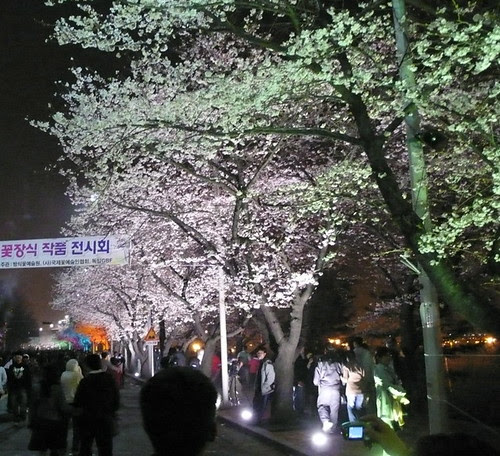 We saw the Rope Dance play on Sunday, Jultagi is a superb performer on the rope. If you've seen 'The King and Clown' you will enjoy this. He's on at 4pm behind the National Assembly building until the 11th April.
Posted by Jon Allen at 2:33 PM