It's Cherry Blossom time of year and there is a big festival on our doorstep in Yeouido. The road that runs around the National Assembly building has been closed to traffic and Seoulites in their thousands are flocking to the spectacle of over one a thousand Cherry trees (Prunus Yedoensis) in full blossom along the 5.7km road. This is the sculpture outside the Yeouido full gospel church: 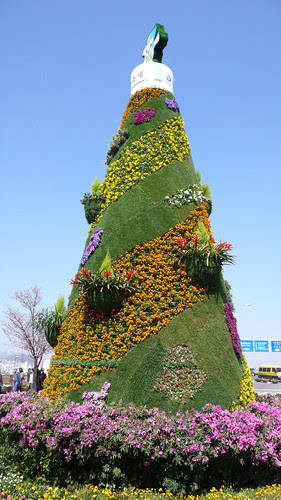 In addition to the Cherry trees there is a display of interesting and unusual flower arrangements along the road; caricatures artists have setup their easels; and apparently you can also sample free beer, though I've not found that stand yet. Face painting is also on offer for the youngsters.

There are two large stages setup, one behind the National Assembly which has performances of traditional Korean folk music; traditional dance, outdoor theather and a six act rope dance play ending on the 11th April. The other stage, beside the Han river, includes ballroom dancing, and Taekwondo performances.

To get to the festival, which runs until 15th April, take subway line 5 to Yeoinaru, exit 2 and walk along the Han river towards the LG Twin towers, Or Yeouido station exit 2 and walk towards the National Assembly. To get you in the mood, Yeouido station has been decorated with cherry blossom on the advertising from Samsung for their latest PAVV range of plasma televisions. 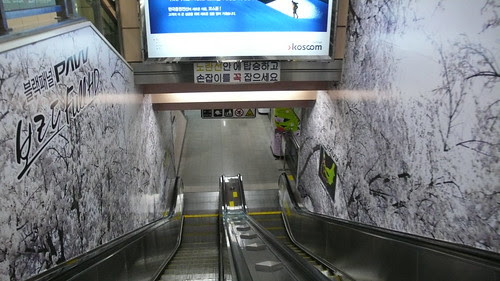 Photos of the blossom later, today's were not great. The details of the performances don't seem to be on any website, but I have the leaflets so if you need more details please drop me an email or leave a comment.
Posted by Jon Allen at 5:07 PM

I might be checking out the festival either today or tomorrow. I'm pretty stoked to take some pictures. So they are out in full bloom now?