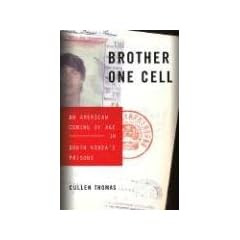 No, not me, but Cullen Thomas, a young American lad who has just published a book about his experience titled Brother One Cell. While on holiday in the Philippines he made the stupid mistake of posting a block of hashish to a post office in Seoul. The police were there waiting for him when he turned up to collect it.

He was sentenced to prison where he met a wide range of colourful characters. As a native English speaker, he was in great demand from prisoners and guards alike who were keen to improve their English skills with him. Prison conditions sound harsh; in winter water freezes in the unheated cells but Thomas does not complain. Inspite of the boredom he remains calm and takes pleasure in the small things of his sparse life.

I must admit, I have not read the book yet, but I came across a review of the book in the International Herald Tribune. As the metropolitician and I have both noticed, the IHT seems to be printing an increasing number of stories on South Korea these days.

Meanwhile, for those needing the more normal style of guide book, you will be delighted to know that the latest edition of The Lonely Planet Korea was published last week.
I have seen copies of the book in Kyobo bookshop in town priced at just under 30,000 won. The new fully updated 7th edition replaces the previous edition published in April 2004.

Glancing through it briefly I noticed it mentions the new Incheon railway as expecting to be open by the end of March, but has no details. Since the book no doubt went to press several months ago it is excusable not to have the very latest details.

That excuse does not apply to the Incheon Airport website, which 10 days after the opening still does not mention the new railway link. Having no new pages ready to publish for such a large and important piece of transport infrastructure seems very poor indeed. My e-mail to the webmaster has elicited no response as yet.
Posted by Jon Allen at 8:28 AM

I hope you signed your email "Disgusted in Tonbridge Wells"

Funny that the Lonely Planet website doesn't even mention the new book.

Daeguowl. too right.
Mark. yes I saw that, I feel another email coming on from 'disgusted of Seoul'

please feel free to add the link in the comments. I could not find the review on the IHT website, otherwise I would have put a link.

Jon - sorry my attempt at htmling the link failed - you can click on the date/time link on my above comment and it will take you to the links.