Construction on the AREX railway

Phase 1 of the AREX airport link between Gimpo and Incheon airports opened in March. Phase 2, which takes the line from Gimpo into Seoul Station, has been under construction for sometime now and I have been photographing what I can of the sites where work is occurring.

At Gimpo airport the line is deep in tunnel, it heads north east and rises to the surface to cross the Han river on a new bridge. 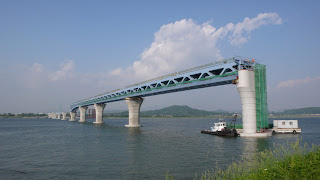 On the north bank of the river the next section of the bridge is being built, ready to be moved into position.

The line curves to the east and descends into tunnel to go below Susaek bridge. The line is being built in a cut and cover tunnel running parallel to mainline railway to Susaek station. From Susaek to Gajwa railway station there is a short section being constructed using the "Tubular Roof and Trench Tunnelling method" it proclaims on a banner at the site entrance. At Gajwa I sneaked into the work site and got this photo of the 50m deep excavation. You can just see the guard on the far left coming over to order me off the site. 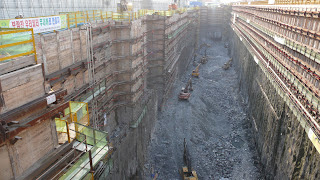 However it seems they had miscalculated something and the retaining wall on the right hand side of the photo collapsed suddenly on Sunday afternoon :

[Photo courtesy of the Korea Times newspaper.] Thankfully no one was injured. The construction site worked evacuated the site at 4:30 when they realised the wall was not going to hold, but no one thought to inform the railway that they may want to stop trains until 5:00pm. The last train crossed the tracks just two minutes before the collapse. The chosun has some choice words to say about this!

I visited the site yesterday and there was a continuous stream of trucks delivering material to fill the hole to be able to reinstate the railway lines as quickly as possible. It was a local attraction with at least twenty men watching the proceedings. I hope this setback does not delay the opening date of 2010.

From Gajwa there is another short section not in cut and cover before the open trench reappears. The trench follows the line of the previously existing Yongsan railway line traces of which can still be found at a couple of the roads that cross the work sites. At Hongik University there is more major excavation for the new station which will connect with Subway line 2. The trench continues to Gongdeok where there will be another station. The line then continues in bored tunnel under the hill to come out on the west side of Seoul Station.