Back in November last year I mentioned the start of construction of the International Finance Centre Seoul. [Their website has to be the least informative site I have ever visited.]
Days after that photograph of the trees was taken, the hoardings went up and work began in earnest. As you can see from this shot the hoardings are a work of art in themselves. These drilling machines have a certain 'transformers' look about them. 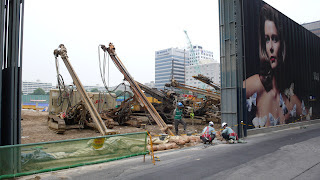 This was the view yesterday from the Shinhan bank office overlooking the site. The LG Twin towers are opposite.

And this is the view from the other direction looking towards the Shinhan building, peeking through an open door on to the site. 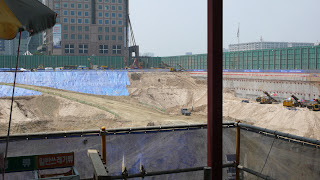 As you can see they are going deep with the underground levels. There is a continuous stream of heavy trucks removing the earth. Here you can see the drilling machines at work. 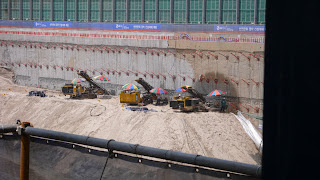 Across the road is Parc1. The ground breaking ceremony was on the 5th June 2007 and the hoardings went up around the whole site very quickly, but there is not much else to see at the moment.

The Parc1 site was the last undeveloped lot on Yeouido, with the possible exception of a small plot near Building 63. However there's a two story KBS building, with a large area being used a car park, right beside the site of the subway station currently under construction on line 9. I think this is a prime target for redevelopment. The next most likely place is a block directly opposite the National Assembly building occupied by some elderly and shabby low rise blocks, used again by KBS. I can already sense the wrecking crews moving in.

Longer term, I spotted an announcement that MBC, a large broadcasting company, are planning to move their headquarters out of Yeouido across the Han river to the Digital Media City currently under construction not far from the World cup stadium in 2011. This will no doubt be followed by the swift redevelopment of the sizeable plot they currently occupy. So the rumble of construction trucks will continue around Yeouido for many years to come, as I think it will do around the rest of the country.

Here's a google-earth snapshot with the sites marked. 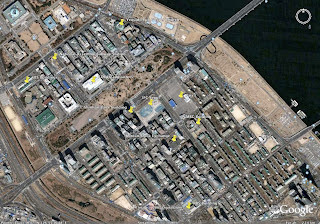 Beautiful construction site, and maybe it will become beautiful after it is completely finished building.