The Dragonfly Kingdom Nature Park is a well known attraction in the area. Just outside the town centre of Nakamura in Shimanto-ku is a 50 hectare park featuring enough habitats to give you the potential to see 76 different species of dragonfly.

Construction of the Dragonfly sanctuary began in 1986 with the conversion of some abandoned paddy fields into ponds with a variety of flowers selected to be attractive to dragonfly. Work has continued and now includes a sizable museum and fresh water aquarium. Of course, not all the dragonfly species are observable in the nature park at any one time, the different species have hatching periods between March and December.

If you arrive on very wet day, like we did, you may see only a couple of the insects outside in the park. However, while the specimens mounted in display cabinets inside can't quite match the sparkling iridescence of real live creatures, they certainly give you an excellent display of the wide variety that exists. 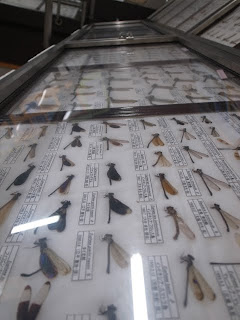 The aquarium section of the museum housed some of the most enormous and unusual fish I've seen. The stars of the show are the Arapaima Gigas. 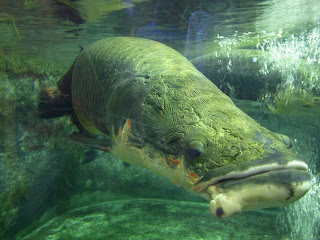 If you show up at 4pm, you might get to help feed them if you are lucky. They snap up their dinner of small fish with lightening fast bites. It quite enthralled these young children, which also gives you an idea of the size of the fish. 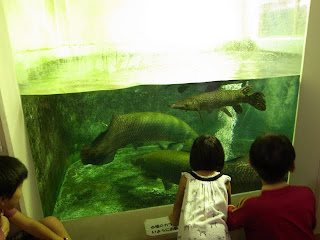 All my other photos of the fish were of poor quality. This is one of the less bad ones of one of the many unusual species they have there. The 80 large and small tanks contain over 300 different species with more than 3,000 specimens of freshwater fish and estuarine water fish from Japan and around the world. Most are well labelled with the latin names. 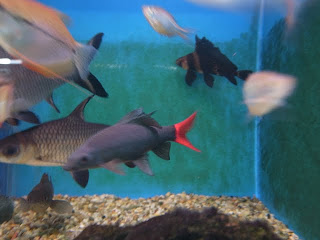 Access is 10 minutes by car from Nakamura station on the Tosa Kurishio line. Many more pictures on the Dragonfly Kingdom website. ( Japanese text only)
Posted by Jon Allen at 10:27 PM