We went to a number of museums during the holiday. One of the most modern and stylish looking building was the Sakamoto Ryoma Memorial Museum in Kochi. 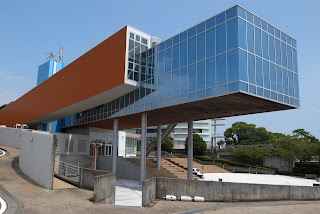 Sakamoto Ryoma was born in Kochi in 1835 and made a major contribution to changes in the political scene in Japan. He was assassinated at age 33 shortly after he formulated the Eight point program for the modernisation of Japan.

The locals are understandably proud of their local hero, the airport is named after him and one Kochi cafe manages to produce an impressive portrait of Ryoma on their cafe lattes. It's a shame I only discovered that today otherwise I'd have my own photo to share.

The museum located on the coast about 20 minutes drive from Kochi centre is open from 9am to 5pm all year round and entrance fee is 500 yen.

There are not that many exhibits for such a large building and very little English text. The museum website reproduces the brochure which contains basically all the exhibit labels that were in English, so unless your Japanese is very strong it does not take that long to go round.
Posted by Jon Allen at 11:05 PM