I have always had a certain fascination with building sites. If I hadn't been a computer programmer, I think I would have been a civil engineer. Since I've been here I have had plenty of time to follow the progress of the large number of building sites dotted around the small island of Yeouido.

While wandering around the ecology park I stumbled across this modest little monument to the building of the embankment around the island. There are some pretty impressive statistics there:
7.6km in circumference
16m high
21-50 m wide
8.5 million cubic meters of reclaimed soil
520,000 people
58,400 construction machines used
4 million cubic meters of rock
The dedication reads:
Here stands an embankment. A threshold to a miracle of the Han River and a promise for the prosperity of the Yoi-do community. Built with the heartfelt support of President Park Chung Hee and four million citizens of Seoul. This embankment was dedicated on June 1 1968 after 100 days of work launched Feb 20 1968.

And they have been building ever since.

Directly opposite our building is the building site that caused the fire in our apartment. It does not seem to have set them back. The 14 storey building has been totally gutted and refurbished since I arrived mid August and it looks like it's going to be ready in the next few weeks.

The building site beside the National Assembly has been making steady progress:

There are a couple of other office blocks and a large apartment complex this side of the park that are almost finished. The two large Marriott serviced apartment blocks will be completed in April 2007.

The five towers of this new apartment complex are starting to make an impression on the local skyline.

They have just started site preparation work on what was a parking lot, beside the Yeouido Transportation Centre bus stop. 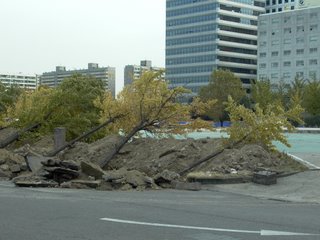 The trees have been very carefully removed and it looks like the hoardings will go up in the next couple of weeks, there is no indication yet of what is to come.

In contrast there is a site right beside it, which has a large poster promising Parc1. This Richard Rogers Partnership designed project is really impressive, the website is worth a look. It will have two 70 storey towers, at 270m the largest towers in Korea, hotels, a conference centre, a shopping mall and a cinema complex. Construction work is supposed to start in 2006 according to the website and open in 2010.
Work has just begun beside Yeouido metro station on another skyscraper project called S-Trenue.

Running down the middle of Yeouido is part of the massive linear construction site for the Seoul Metro line 9. This huge project started in 2002 and due for completion at the end of 2008 will see 25.5km of new metro. It will have three tracks to allow express trains to run between the interchange stations as well as regular trains. There will be a new station outside the National Assembly building, an interchange with line 5 at Yeouido station and a new station at the eastern end of the island.

The method of construction is interesting. They have excavated the road along the route of the line and then covered over the excavation with steel girders and heavy iron roadway sections that can be removed as required. A common sight is to see concrete being poured into the worksite beneath the street: 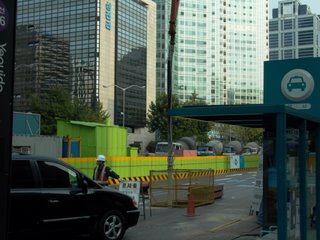 notice how many cement trucks there are lined up ready to continue the pour.

As you can see, plenty to keep me interested, and that's just in Yeouido. Around Seoul and the rest of the country cranes are all over the place.
Posted by Jon Allen at 8:44 AM

Interesting post. I've been quite interested in the New Town redevelopment projects in Seoul (there will be several around Yeouido) and have been keeping track of the redevelopments around Cheonggyecheon as well as those around where I live near Gimpo airport (Line 9 is also passing near my house).

The photo of the parking lot with the trees being removed is the site of the Seoul International Finance Center (scroll down for photos). Oh, and awhile back I posted a few pictures here of Yeouido when the embankment was being built (and when Yeouido still had an airstrip) - hope they're of interest.

thanks for the links matt, I'll be following the progress.

I found several photos of the Yeouido embankment construction in the book "Seoul Through Pictures" vol. 4. Well worth getting for the pictorial history from end of the 60's to 70's.