I have a keen interest in recycling and it has been instructional to see how seriously the Koreans take it. With a city of 10 million people and space for landfill at a premium, you can understand why. In 2003, nearly three-quarters of all waste was recycled; this is one of the best rates in OECD countries.

One of the most important pieces of orientation we had from the building manager was an introduction to the rubbish and recycling area in the basement.

Here’s the deal, at least in our building:
Glass bottles, metal tins and cans go in one bag.
PET bottles go in another bag.
Other random large bits of plastic and polystyrene go in another bag.
Large cardboard items are piled up here: 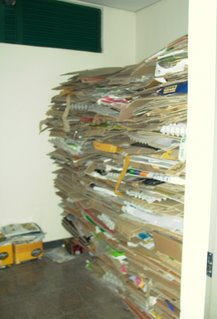 Other paper is collected in boxes in the corner.
Newspapers are collected in a separate pile.
Fabric and material goes into a bag.
Small cardboard and paper items go into another bag.
All organic waste is emptied into a small bucket outside the front door and the plastic bag you brought it down in goes into another bucket beside it. (You really don't want to see a photo of that as it does not get cleaned very often!)

All these various bags are collected by men who pile them high on to their small trucks and cart them off to various recycling depots around the city. I would be very interested to know the economics of this whole chain and what happens next, if anyone has any information please let me know. 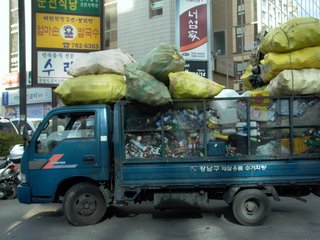 Anything else that does not fit into those categories, usually very little, goes into special taxed waste bags, they come in 10,20,50 and 100 liter sizes and are collected by the dustmen.

There's a small truck that makes the rounds once a week collecting old electrical equipment, monitors and computers etc. It plays a recorded announcement that sounds like 'foobar hamnida'. Quite apt for old computers.

Koreans are also coming round to the idea of secondhand shops. Whereas in the UK the high streets are often crowded with charity shops offering second hand clothing, books etc etc they are not so prevalent here. There are second hand furniture shops, but they tend to congregate in one place, for example Noryangjin. The Beautiful Store is one chain that is expanding here and I have been to their shop in Seoul Station.

In a similar vein, one waste reduction measure that I thoroughly approve of is charging 50 Won for carrier bags at the supermarket. I don't think it is a tax the way they have done it in Ireland, but still, it's a small incentive to bring a bag with you. It's something the carrier bag manufacturers are keen to prevent in the UK.
Posted by Jon Allen at 9:14 AM

Great post John. The recycling here still amazes me--it's extremely efficient for a city of 12 million or so. If only cities back home would catch on to recycling that happens inside fast food restaurants:

Now if they could only clean up their national parks!

Well that was a nice post. I liked it.
Bathmate

I think recycling is a great alternative to save our planet or decrease the pollution. I think this problem still have a sollution, just depend of us. We need to think about our vehaviour and make a change and start to make the difference.