The reason for the short break in posts recently is that we took a trip out of Seoul to see more of South Korea before we leave.

To break up the long drive to the south coast we stopped in Gongju. Gongju was the capital of the Baekje Kingdom from AD 475 for 63 years before the capital was moved south to the town now known as Buyeo. Like Gyeonju the city has a number of royal tombs. King Muryeong was buried in AD523 and his tomb was undisturbed until 1971 when it was rediscovered by accident. Some of the 3,000 priceless artefacts from the tomb are on display in the Gongju National Museum. The materials and craftsmanship of the tomb objects show how advanced the Baekje Kingdom was at that time.

We visited the museum first, then walked round the hill to the actual tomb site. The tombs were sealed in 1997, to prevent deterioration of the patterned brick lining, but there is another underground museum with replicas of three of the tombs on the site. There are also some excellent models showing how the tombs were constructed. 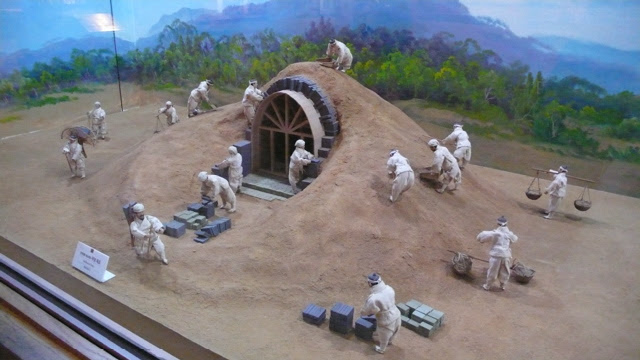 We drove to Gyeryongsan National Park to find the cherry blossom festival in full swing. However accommodation was not difficult to find and we checked into a small minbak (It's like an English Bed and Breakfast, but there is no breakfast) for 50,000 for the night. It was raining the next day, but the walk into the park to Donghaksa was still very pleasant. Dave was there recently and has some photos.

The next night we stayed at a hotel in Naejansan National Park. The 'service area' with restaurants and shops and hotels is a real eye-sore, but once we got away from that it was a very peaceful walk along the stream to the temple (Naejangsa). From there we climbed the hill to the observation point and admired the view of the valleys before descending back to the stream by cable car.

We drove on to Damyang. The Bamboo Forest attraction was more like a small amusement park with wide pathways and models of pandas, it was nearly closing time and we got in for a quick look round for free. There is a bamboo festival which runs until 5th May but we were too early to catch the start of it. We also missed The Bamboo Museum which sounded interesting.

Unable to find a hotel in town we drove on to Gwangju and ended up staying in a 'love motel', which was interesting! Only 35,000 won for a large room with huge TV, a heart shaped bed with some smelly bedding and a painting of a nude on the wall. Leaving the motel in the morning was easy, but escaping Gwangju was more difficult. The roadsigns did not indicate any routes or towns outside the city. Heading for the hills we eventually found a sign for the expressway and continued our journey south and crossed onto the island of Jindo over this suspension bridge: 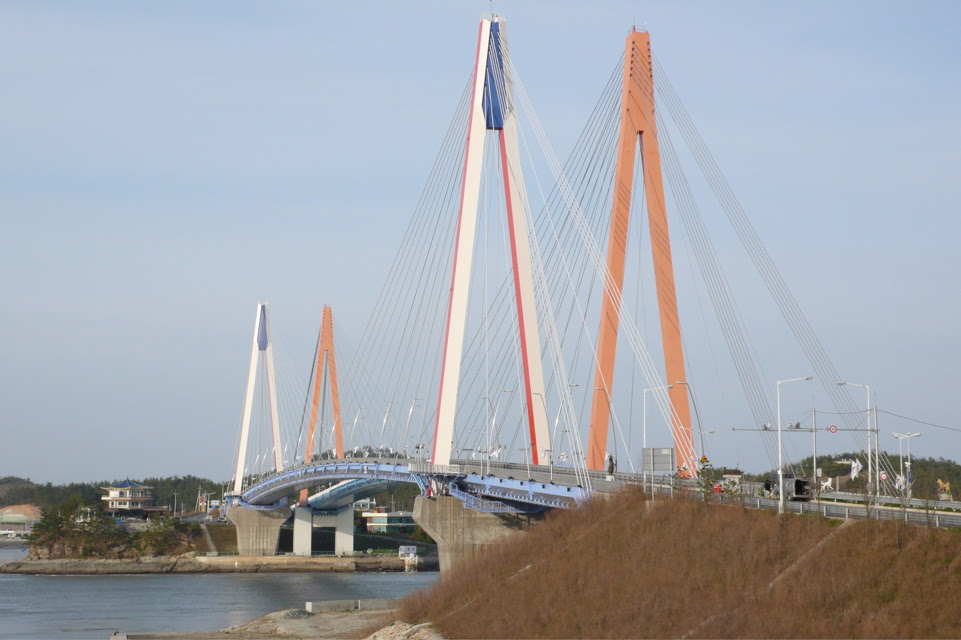 We arrived in time to catch the Miracle of the Jindo sea parting. This remarkable event happens every month when at low tide the seabed is shallow enough to walk across to the tiny island of Modo 2.8km off the coast. The festival is held once or twice a year and there were hundreds of stalls selling food and local produce. There was also a stage with traditional dancing and folk performances. 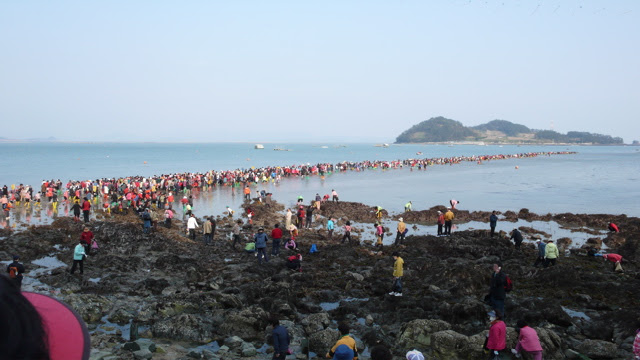 We purchased plastic wading boots, made out of the same material you make rubber gloves from, for a very reasonable 5,000 won and set out, along with the thousands of others, onto the sandy seabed. There was a real carnival atmosphere, a lot of people were busy digging for shellfish and collecting seaweed to eat, but most people were just enjoying the spectacle.

Hello, I'm Emma Jang from WorknPlay in Seoul, Korea. I read about your interesting Jindo Sea Parting Festival experience in Korea on your personal blog. Would you consider also sharing about this festival on WorknPlay's website? You could use this opportunity to publicize your blog, by include a link to your website. Please feel free to contact me via e-mail eunjung@worknplay.co.kr .
Thank you.

Is it easy to get an accomodation at Jindo or is it so crowded that it is necessary to book in advance for the Jindo Sea Parting Festival?

Seems like the accomodations in korea (outside seoul) do not have other communications means except by telephone... hummm... or is that a wrong perception ?