In a bid to escape the concrete jungle of Seoul at the weekend, we ventured into the nearest National Park to Seoul : Bukhansan. This is proud to hold the Guinness world record for the National park with the largest number of visitors, over 5 million at last count. ( It's a shame they had to build a motorway through it ). The large park ( 79sqkm) is easily accessibly by Metro and Bus and there are over 40 different ticket booth entrances to chose from.

We went to the north western enterance ( Subway line 6 Yeonsinnae, and then Bus 34 ) which takes you right to the gate. Unsure as to what the catering arrangements were inside we had some lunch at a small shack on the road, it was tasty but not cheap.

The Koreans, we have discovered, are very keen indeed on their hiking. It was a hot day but there were hundreds of very well equipped walkers streaming down out of the park, it was busy, but not crowded. As the day wore on the numbers thinned out a lot. We did not walk all that far, but came across a small buddhist temple in the hills which looked almost brand new and was very peaceful. 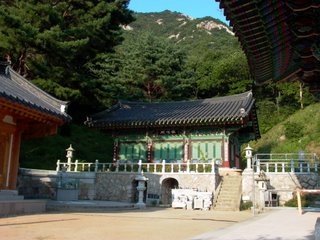 Inside one of the temple buildings were all these little statues: 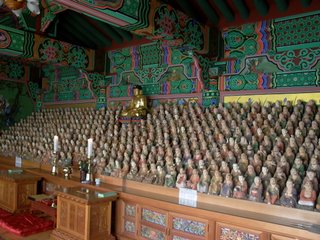 There was not much birdlife around, too many humans, but a number of trees had been labelled in Korean and with their Latin names. We also saw a couple of small mammals a Siberian Chipmunk and Siberian Weasel according to the display boards. We need not have worried about going hungry, there plenty of small places to eat. It was almost like being in a small village at one point there were so many inside the park.
Posted by Jon Allen at 10:24 AM

Jon, I have only just stumbled across your blog and wanted to say many thanks for the linkage. I will return the favour!

I have been to Seoul a couple of times and am a fully signed and paid up member of the kim-chi fan club! I absolutely adore the stuff, in all it's wierd and wonderful guises but it is hard to come by in Dubai. Quite incredibly the wife of the Korean Ambassador has just opened a family style korean restaurant about 100m from my villa. What a result!

Bukhansan looks great!! I can't wait to check it out!!

Did you see lots of koreans with equipped with hard-core mountaineering gear even though they're just on a gentle hike?

It's not really hard core mountaineering gear, they all seem to have the walking sticks, the clothing, the shoes and the backpacks.

It can get quite steep getting up some of these hills, the only reason Seoul has not expanded into this area (yet) is because it is so steep!