No, I don't understand it either. I wonder what the T shirt designer thought it meant? 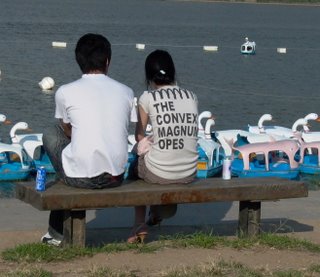 Ever since I arrived a few weeks ago I have been amazed by the "English" on some T shirts. Here's a few of my favourites :

Make the green in heart

Ask Enquired This is a brand name around here. They use the Union Jack as a logo!

Whose fingerprint is this?
...Stop making sense. I've seen this a couple of times now, it always makes me smile

I keep seeing POLHAM everywhere, which is a local brand name, but for some strange reason they like to add the words "THE JUSTIFIABLE" beneath the name on some of their shirts. What are they trying to justify?

Another brand name is HUM, and likewise they feel the need to add a word as well, so you get shirts saying "HUM BRIMMING", which conjures up some very strange images.

I wish I had photos of some of them, but I fear I may get arrested going around photographing young girls wearing T shirts, so the shot of the couple above is the only one I have I'm afraid.

I've just added my blog to feedmap.net and I was looking at other blogs in the area. A lot are either in Korean or have not posted to for more than six months but there are some good ones and I found Miss Koco does korea who has also posted about the same subject this morning!

She also has a great photo of the name of a shop in the earlier post. The best shop name I've seen so far is "Wet Pup".
Posted by Jon Allen at 9:07 AM

Jon: a site worth seeing is www.engrish.com if you haven't already. One of the best I saw was in Japan, a very demure looking middle-aged Japanese lady was wearing a pretty dress with the word FUCK all over it. In big letters, small letters, in bold, in italics, in different colours. It was hilarious!

thanks, I have seen that site v good.

maybe it's akin to the western habit of getting tattoos of oriental symbols, which so far as I can tell, often say "Fruitcake Bus Depot"