Yesterday was my fortieth birthday. Star  Trek is also forty. I didn't feel any older yesterday than I did the day before so I am not going to dwell on this little milestone anymore.

Almost the first thing people mentioned to me when they knew I was going to South Korea was “They eat Dog don’t they?” so since I arrived I have been planning to try some. Lets get some myths out of the way first:

1. No Koreans do not all eat dog all of the time. In fact it is a bit of delicacy and quite pricey. You do NOT find it in all restaurants and you have to know what to ask for to get it.
2. They do not eat any old dog off the street. The dogs are bred specifically to be eaten and are treated like other animals bred for slaughter like cows, sheep, pigs, chickens.
3. Yes during the football world cup and the Olympics there was some controversy about how these animals were reared and, having read some websites today, I cannot say hand on heart that I am sure they are not mistreated these days, but can anyone say that about all their food?

My birthday meal was organised by The Bat (my non-carnivorous wife, for those new to the blog). Two other teachers from The Bat’s English School came with us. Richard, who can speak Korean, asked a taxi driver to take us to a
restaurant that sells dog meat stew. The taxi driver phoned his mate and they found us a very small, out of the way place, not that far from Yeouido and we went inside.

It was more of a private house, than a restaurant. We ordered the Bosintang “healthy soup” as it is known. When it arrived it looked very much like pork. The taste was different, not as strong as venison, more like pigeon if I had to compare it to anything. Personally, I could not connect the meat in the stew with an animal but one of the guys had a momentary crisis of conscience at one point.

Some of the other comments during the meal were : “Is that a dog hair or a human hair?”, “Is that the tail. No it’s just a vegetable”, "Do I hear barking", “Can I have a hot-dog” and to round off the meal : “Do you think they'll give us a doggy bag?”

So there we have it: I’ve eaten dog. It was OK, but I am not planning on eating it again, I prefer the beef, chicken, pork etc.

Here is one of the dogs from outside the restaurant : 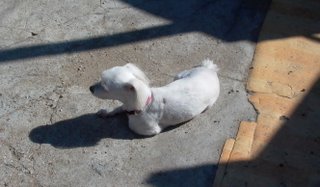 Postscript. Looking through the Korean blog List there is one blog named No Dog Please. Reading his blog I noticed a recent post about the Gupo Dog market. Not for the faint hearted I am afraid. For more references to dog welfare see here.
Posted by Jon Allen at 6:00 PM

Thanks for the link, Jon. Lately I've been checking out more Korea blogs. There are more out there than I though.

At some point I renamed my blog "Homely Planet," but I guess its still listed as "No Dog, Please" on that list.

A very measured post on what can be a controversial topic. I wouldn't be surprised if you get some hate mail...

Anyhow, I have a question...why the bat?

Thanks DG.
When I asked my wife how she'd like to be referred to in the blog, this was her request. It's an animal she has a certain affinity for.

Jon: happy birthday for yesterday! I enjoyed the post, I have a similar tale of foodie adventures on my site entitled 'you are what you eat'. I never did have the opportunity to eat dog when I was in Korea though I remain quite keen to try it.

I had wondered why you called your wife The Bat. :)