Last night, while The Bat was at work, I was out on the town at a local society event at the Millennium Seoul Hilton attending the 8th Pudding Club dinner.

I saw a newspaper story about this regular event, and I was tempted into going by a posting from Rudolf on the Korea Bridge Forum.

After pre-dinner drinks, the meal started with Autumn Mushroom and Scrambled Egg with Smoked Salmon in Chive Cream and it was followed by a Cheddar Cheese Soup.

The main course was delicious Roast Beef with Yorkshire Pudding with a selection of vegetables and Natural Jus. Sadly let down, we all agreed, by the lack of roast potatoes. It was then time for the main event of the evening: The Pudding Parade. Previous themes have included James Bond in The Pie who loved me, Robin Pud and The Full Monty.

The latest theme was royalty. Each of the nine desserts was introduced to us by someone of royal standing: Prince Charles and Camilla; Prince William; Tony Blair; Mick Jagger; Mr Bean; Posh 'n Becks and to bring in the final dessert of the night, none other than Her Majesty The Queen ! 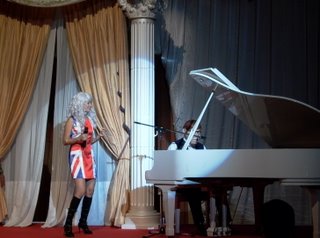 Serenading us on the piano was 'Elton John' who sang a number of delightful renditions of some of his hits including 'And I guess that's why I get Pudding blues', 'A little Creamy', and 'Don't go Baking my Tart' which he dueted with your favourite member of the Spice girls : 'All Spice'.
Other hits of the night included 'Puddings are forever','Can't get no Choco Satisfaction", and 'Bowl Licking'. Lyrics available on request. 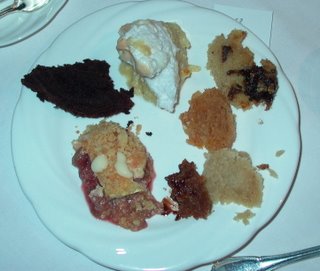 The introductions over, we were invited to serve ourselves from the nine desserts offered :
Victoria's Pudding
Lord Randall's Pudding
Queen's Pudding
Rhubarb Crumble
Chocolate Pudding
Ginger Syrup Sponge
Prince Albert Pudding
Banana Rum Trifle
and that most famous of English desserts: "Spotted Dick" which was the only pudding of the evening that I did not taste. [I've had it once before... but the antibiotics cleared it up eventually.]

A photographer from the Korean Tatler was there and I am looking forward to my appearance along with the other distinguished guests at the event in the next issue of their esteemed magazine.