I had my hair cut last week. I wanted to go into this barbers and ask for a "Shaggy Dandy" : 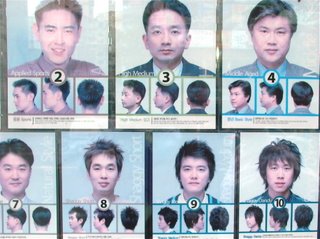 But The Bat took me to another place and I ended up with a regular hair cut.

It is amazing how you can get by without speaking a word of Korean. Most people do not speak any English at all. Some people can understand a couple of words but 99% of communication has to be with gestures and pointing.

Inspired by so many people, including Gdog at The Daily Kimchi, who have said it is very easy to learn the Korean alphabet (Hangul) I have started to try and learn the letters. So far I can pick out a few of the consonants. Learning on the metro seems to be a good way because each station is announced and the electronic displays alternate between the Hangul and English spellings of the stations.

One confusing thing about the Romanisation of Hangul is that the Government changed the rules in 2000. So older guidebooks and text may have the old way of writing place names which do not correspond to the current signs. For example Pusan, became Busan etc.
Posted by Jon Allen at 7:41 AM

I'm glad you also find the lack of consistency a bit confusing! And it's not just books and print media; people also seem to just 'choose' the form they feel most comfortable with. So, for example, some people use the older "kimchee", some people retain the more common "kimchi" while others prefer the newer "gimchi". It all tastes the same but .. it gets a bit confusing at times. :)

And because you're now studying hangeul (kudos and congrats, btw) you might come across the Problem of The Charcter "어" :

Some people with this character in their names use the English alphabet to spell it "UH", while some folks use the new version which puts it at a "EO". I know a man who spells his name "Jung Suk" but his passport lists him as "Jeong Seok". It's a minor annoyance, of course, but can be more thwarting for a person who is just starting out ...

One thing you might find confusing (offensive) is that when writing English in Hangul, everything is written according to American pronunciation rather than spelling so that Hot Wings are written as Hat Wings in Hangul (sorry, I'm away from my hangulised computer).

Jon,
Good luck with Korea. It took me a good 10 years, I think, to be decent, but that was not continuous learning and I was living in the States. Living here you'll pick it up much much faster. I took classes at both Ehwa and Sogang univ -- if you have the time (courses are usually 3-4 hours per day) I think it's the most effective way to learn. Plus you have other people going through the same difficulties who you can lean on and moan to.

thanks for all the encourgement.
Jon

Hey Jon, way to get started on the Hangul. I've been lagging behind myself. ;)
We should meet up during Chuseok as I will have some time off then. Keep up the bloggin!