Trip to the DMZ

One of the most heavily publicised tourist day trips out of Seoul is a visit to the Demilitarised Zone (DMZ). Stretching for 248 km from coast to coast this 4 km wide strip of land divides the two nations on the Korean peninsular : the Democratic Peoples Republic of Korea DPRK to the North and the Republic of Korea ROK to the South.

The Military Demarcation Line (MDL) runs approximately along the 38th parallel, this line was agreed after 20 months of talks in 1953 and its agreement marked the Cease fire in the Korean war. Note: It is just a cease fire, the two nations are still in theory at war.

Today at least five companies offer tours of various combinations of the sites of interest that lie around 50km north of Seoul. We went with www.tourdmz.com who offer a full day visit.

Our first stop, after an hours bus ride, was the 3rd Infiltration tunnel. We were shown an upbeat and very optimistic video presentation highlighting some of the history of the war, before being seated in the small cog railway to be taken 300m down the access shaft to intercept the North Korean built tunnel at a depth of 73m.

Information from a defector in 1974 started the search for the tunnel. The method of detection was to drill a number of boreholes, line them with PVC pipes, fill them with water and watch and wait. In 1978 their patience was rewarded when one of the boreholes erupted due to the dynamite explosion from the construction of the tunnel below. [Why they could not use Seismometers, I did not get a chance to ask]. The tunnel is roughly 2m high and 2m wide. Blasted through mostly granite rock it reached 435m into ROK territory, only 50km to go to their intended target of Seoul. It seems to me a highly dangerous and unpredictable method of infiltration, but the North Koreans had other ideas and three other tunnels have been discovered.

The tour moved on the Dora Observatory, where we surveyed the DMZ from the lookout on the hillside. We could also see the tallest flagpole in the world in the North Korean village of Gijeong-dong and the smaller one on the opposite side in South Korea.
The next stop was Dorasan railway station. 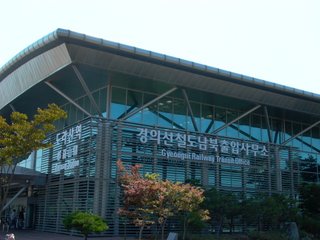 This large modern building was opened in 2002 and would be the envy of many British towns and cities. Spacious, clean and modern the only thing missing is a reason to come here. Trains arrive three times a day from Seoul for the local population and military, but tourists cannot leave the compound around the station. One day it could be an International station with the possibility to travel on the Trans EurAsian Railway network, for the moment it's a peaceful tourist attraction in its own right.

The next stop was the Freedom bridge and peace park, this non descript bridge was the scene of the first exchange of prisoners after the Korean war.

After our meal of Bulgogi, we started the second half of the tour with another visit to the Freedom bridge. Not great organisation on the part of the tour company there. The highlight of the tour was the trip into the DMZ to Panmunjeom and the Joint Security Area. After a lecture from our guide on the history of the area we were taken under strict security to the small shack that lies on the actual MDL. One half of the room is in North Korea, the other half in the South. It was here that the Armistice was signed on July 27th 1953.

The whole camp is very quiet and well ordered. The buildings are modern and well kept, it almost looked like a university campus. The American soldiers that escorted us were friendly and knowledgeable. They were pleased to answer questions on life at the base and history of the place. All too soon we had to get back on the bus to come back to Seoul. It was a very interesting tour and it really does bring the history to life, I would highly recommend a trip to the DMZ to any visitor to Seoul.
Posted by Jon Allen at 9:38 AM

I've talked to my coworkers and apparently one of the best DMZ Tours is by the USO, a branch of the US military. We're planning a trip near the end of October, I can't wait.

That train station reminds me of our attempt to use the Metro in Melbourne Australia. We were going into town on the tram but got off at the Metro station, just to try it out. Lovely clean marble entry to the station, but we were turned away at the barrier. Apparently all the trains go INTO town in the morning and since it was now the afternoon there were only trains running OUT of town, so we had to go and get back on the tram!!!! I still find it hard to believe, but we didnt get a chance to try again, so I dont know if it was true or not. When we asked the locals they were quite touchy on the subject. Apparently the Metro was only built out of Melbournites being upset that Sydney had a Metro and they didn't!!!!