Thanks to Robert Koehler posting a last minute message on The Marmots Hole on Thursday, we had an extremely enjoyable weekend as guests of the
Arts council Korea visiting Jeonju and the Sori festival

Organised by the Korean Music Festival and Seoul Selection, this visit is one of a series of four tours intended for foreigners to experience Korean culture and visit some historically significant sites.

We departed by luxury coach from outside the Seoul Selection bookshop and arrived three and a half hours later in Jeonju in time for bulgogi lunch at the restaurant Honamgak. For The Bat and me this was our first trip outside of Seoul, so it was interesting to finally see some countryside and get a glimpse of the country from the bus. First impressions are that land is scarce and every available plot is used for growing crops. We also observed how densely packed the apartment blocks are particularly on the outskirts of Seoul.

The first musical event was to see and hear the the great voice of ‘Kim So-hee, The Voice of Heaven’ at the Sori Art’s centre Yeonji Hall. She performs traditional Korean style singing which we had not heard before. It was an unusual sound: opera-like does not really begin to describe it, but very enjoyable. Kim, the other singers and musicians are obviously of the highest standard and it was a pleasure to hear them. I managed to snatch a quick photo : 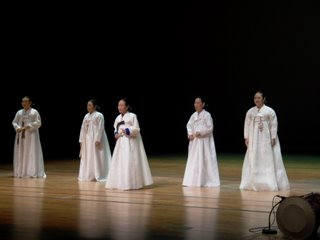 After an evening meal of bibimbap we came back to the Art’s centre for the opening gala performance of the Jeonju Sori festival. It was a varied and exciting show including a huge group of Korean harp players, traditional folk singing, a fusion group of western players and Korean singers, a Korean Rap singer and Korean break dancing. 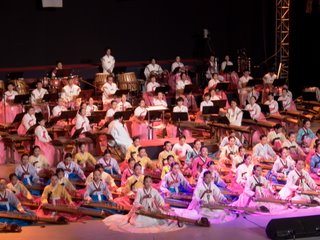 Our accommodation overnight was in the traditional folk village of Jeonju, where we were comfortably looked after in a beautiful old building and sampled living in the style of the Yangban (the elite ruling class of Korea of old).

After kimchi for breakfast we were introduced to the Korean tea ceremony. Our host explained some of the customs and traditions associated with drinking the precious tea and we did our best to imitate her style and grace. They also had traditional clothing called hanbok for some of us to try on. Here I am : 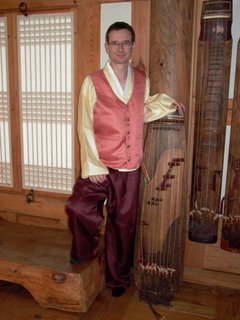 We were served another delicious meal at a local restaurant at lunchtime before being driven back to Seoul through the rain resulting from Typhoon Shanshan.

The previous trip suffered a few problems with delays but on this trip we could not fault the organisation and planning in any way. Our group of approximately thirty foreigners from Britain, America, Canada, China, France, India, Australia and New Zealand from a variety of different professions all had a very entertaining and enjoyable trip. Many thanks to Robert and the other organisers and sponsors. We look forward to the next two trips to Damyang (Sep 30) and Songgwang-sa/Seonam-sa temples ( Oct 14-15) Contact Seoul Selection to book.

For those wondering about the title of the post, Sori is Korean for Music.
Posted by Jon Allen at 10:23 AM

Actually, sori is sound. Not exactly music. Music is 음악. ;-)

Thank you. I stand corrected. That was the translation given in the program.

I forgot to mention but I was interviewed again by SBS while we were all standing outside the arts centre.

I just heard from a lady that works in our building that while my interview was not shown, she had seen The Bat on the news item!