I wish I could say that this is the view from our window: 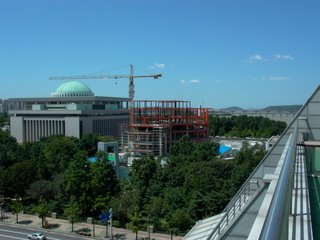 But it's not quite. Due to the crazy way the apartment was built the wrong way round, it's the view from the corridor and balcony outside our apartment. Instead our one room looks out at the building next door about 10 feet away, which has become, between the time The Bat came and viewed the room and the day we moved in, a building site as they refurbish it. We have drills and hammering starting from around 7am until 8pm or later.

That building is the National Assembly building. That website seems particularly harsh, but explains how this little island was planned as the "Korean Manhatten".
If you want to see where exactly we are here's google maps reference however our building was not built whenever that shot was taken. It's the second block from the top in the group of eight. To the south is Yeouido Park, a narrow strip of greenery that is very pleasant of an evening and in the morning on the way to the office for The Bat.

We are slowly getting settled in. We’ve unpacked all the boxes and thrown them away, well, added them to the huge recycling pile in the basement here.
By some miracle pretty much all our stuff seems to fit into the built in cupboards, with just a few bits and pieces on the floor.
The previous owner sold us two armchairs and two regular chairs, otherwise there would be zero furniture in the room. There is no bed, just some very thin bedding rolls that we are sleeping on. There's a parquet floor, so it's a bit hard!

The cooking area is not too bad. A washing machine that I have just been able to get to work this morning; a sink; two electrics rings and plenty of cupboards. However with the price of food, it’s a lot cheaper to eat out.

I've taken loads of photos. I'll try and get round to putting some of them on to blog as I progress.
Posted by Jon Allen at 8:20 AM

Thanks for dropping by....I'll be keeping an eye on your site too so I can learn from your experiences in planning my own move to Korea next year.