I went back to the Korean Immigration Office in Seoul yesterday to collect my Alien registration card: 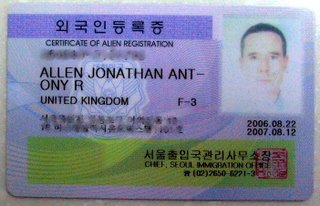 All very fast and efficient, only 10,000 won. I've checked, and my spouse's visa does not allow me to work. They are very strict about this so no working for me, oh dear what a shame, but since the house husband lark is going very well so far I don't think this is going to be a problem.

I met up with The Bat in the afternoon and we went "into town" to the Bank Of Korea Museum. It's not a very large museum and does not seem to be on many maps, but it is free. Inside, the building and the atmosphere reminded us both a great deal of the Bank of England Museum in London.

There is not very much English text on the display boards, but all the objects in the museum were labelled in English. The most unusual was a Horse hoof shaped silver coin. It was about 8 cm across, 4 cm deep and shaped like a cast of a hoof: not very comfortable to carry in the pocket.

It's surprising that with those huge sums of money they go right down to Euro cents to balance the books.

Also currently at the museum is a temporary exhibition of a collection of currencies from around the world. A large selection of notes and coins from over 50 countries are viewable in pull out cases. A small improvement would have been to include the year of production for the notes, since not all were the current notes in circulation. There were also some exhibits of currency oddities. I liked: the 3 dollar note from the Bahamas; The half franc note from Tunisia; A 2 Tala bill from Samoa; and the 15, 45 and 90 unit bills from Myanmar.

Well worth a visit if you have 30 or 40 minutes to kill. It's less than ten minutes walk from City Hall. Strangely the BOK does not even mention it on it's website! It's like they want to keep it a secret.

JA. You really DO look like an "alien" on that card! No wonder they tried to roast you alive in your apartment. Had been considering visiting, but it seems even hairier than Dhaka...