Under the Gourd Walk

I thought I'd show you a couple of photos from our route during the walk to The Bat's office in the morning. This is a 50 meter long walk through a tunnel of gourds in the middle of Yeouido Park. 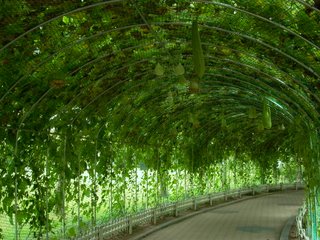 It's quite an impressive sight. They employ a number of gardeners whose sole task appears to be tying up the gourds to prevent them dropping, and cleaning up the dead leaves from the plants. There is also a security guard there during the day, we assume to prevent people from helping themselves to these low hanging Cucurbitaceae

The other side of the park is an eight lane highway: 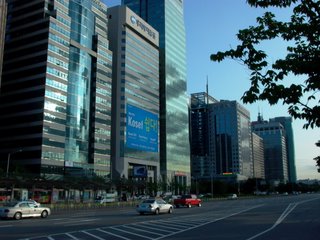 Mercifully there is a pedestrian crossing. Readers familiar with life in Korea will immediately spot what to most people may seem completely commonplace, but is rare here. To save you guessing it's the red car. In Korea it seems as though you can have any colour car you like as long as it's black, white, silver or grey. In the two weeks I've been here that was only the third red car I've seen.

Meeting up with The Bat again during the afternoon we went swimming in the Han River park in Yeouido. Outdoor swimming is very refreshing in this heat. For some reason just after we'd got there and swum a bit, we realised we needed to be wearing a swimming cap, bought one, everyone out of the water for 15 minutes. Luckily an english speaking person told us. No idea why we were all kept out of the pool for a bit, then just as suddenly allowed back in.
Posted by Jon Allen at 9:24 PM