I've mentioned Yeouido park a few times. There is also the Yeouido Setgang Ecology park which I have been visiting these past couple of days. It is, as it's name suggests a lot more natural than the park, the footpaths here are all gravel and there are no labels on the trees etc.

It has been a good place for birdspotting. In the past two days I've seen : Spot Billed and Mandarin Ducks, an Egret, two Night Herons, several Grey Herons, a Black Naped Oriole, a pair of Rufous Turtle Doves, plenty of Brown-eared Bulbuls, Magpies and Sparrows are everywhere, a Yellow Wagtail, a Kingfisher, a Marsh Tit and an unidentified wader and a warbler.

Since my photos of the birds just show very small brown blobs, I thought I'd share this one of a Cicada. 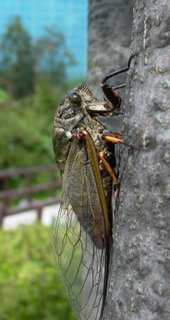 These small creatures make such a loud racket it's incredible. It's taken a while to get used to such noise. There are also plenty of other smaller animals about: we saw two very large butterflies and other smaller ones; dragonflies are very numerous and colourful and the bees are also large. The ponds have koi carp and also turtles in them, and I've seen several small rodents in the park. All in all, not too bad for the centre of the city.
Posted by Jon Allen at 6:33 PM

With all the urban foxes in the UK, it doesn't appear that Seoul has anything as dangerous